Richard III Is Getting A King's Burial 500 Years Later 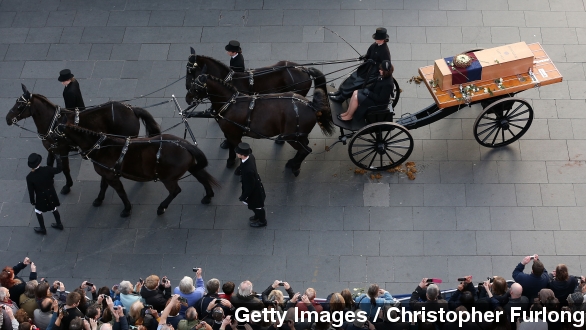 On a sunny day in the middle of England, after more than 500 years, Richard III finally got a king's funeral procession Sunday.

The former king's remains, accompanied by a military escort, were taken through notable landmarks from his reign, including the site of the Battle of Bosworth Field where he died. (Video via Channel 4)

Before the procession left the University of Leicester, Richard's descendants laid white roses — a symbol his royal house of York — on his casket, which his 17th great grand-nephew crafted. (Video via BBC)

Those descendants played a crucial role in identifying Richard's remains, which were excavated from a parking lot in Leicester by university researchers in 2012. (Video via University of Leicester)

By tracking the lineage of the former king's sister, researchers were able to test the DNA of two descendants against those of the remains. In February of 2013, the researchers announced they had a match. (Video via University of Leicester)

Early last year, the mayor of Leicester announced plans for the king to be buried in the city at Leicester Cathedral and for a new multi-million dollar visitor center. (Video via Civic Leicester)

Those plans weren't without their opponents though: A group of people claiming to also be descendants of Richard III argued the king should be buried in Yorkshire, where he spent much of his life. (Video via Sky News)

That case went all the way to the country's high court, which ultimately decided in the university's and city of Leicester's favor. (Video via University of Leicester)

The remains arrived at the cathedral Sunday and will be buried there on Thursday. (Video via The Telegraph)