Rich About To Be Richer Than The Rest Of Us Combined 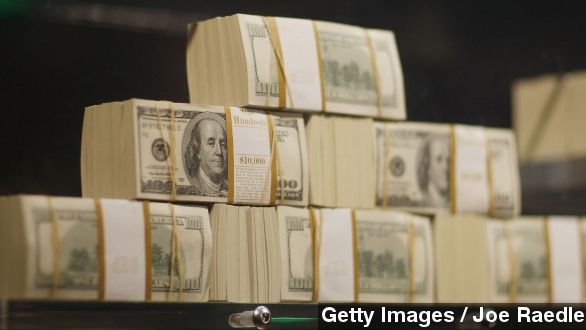 SMS
Rich About To Be Richer Than The Rest Of Us Combined
By Cliff Judy
By Cliff Judy
January 19, 2015
A study by Oxfam International shows the world's richest one percent will own more than half of the world's wealth by 2016.
SHOW TRANSCRIPT

In a story truly based on the phrase the rich get richer, a U.K.-based charity says the wealthiest one percent will own more than the rest of us combined by next year.

This is the same group that attended the World Economic Forum last year and tried to spur debate on economic inequality saying the 85 richest people in the world have as much wealth as the bottom half of the world's population.

Several factors have helped economic inequality get an increasing share of the spotlight in recent years like French economist Thomas Piketty's book Capital in the Twenty-First Century.

Piketty argues the rate of return on capital exceeds the economy's growth rate, which tends to lead toward a high concentration of wealth. Even Piketty stresses that's an oversimplified formula, but he's one of the hottest speakers on the economic circuit right now. (Video via TED)

Credit Suisse also released a study in October with findings very similar to Oxfam's that the richest one percent owns nearly half of the world's wealth.

Reaction to all of this has been anything from analysis of how the rich use their money to grow wealth faster than the rest of us to editorials calling for changes in economic and tax policy favoring the wealthy.

In Tuesday night's State of the Union address, President Obama plans to call for tax increases on the wealthy to help the middle class, though just how feasible such overtures are in a Republican-held Congress is questionable. (Video via The White House)

Some of those goals from the president happen to coincide with Oxfam's seven point plan to narrow the wealth gap.

Highlights of the plan include:

—Clamp down on tax dodging by corporations and rich individuals

—Invest in universal, free public services such as health and education

Oxfam says some of the best billionaire growth came from people with stakes in financial, insurance, pharmaceutical and healthcare industries.