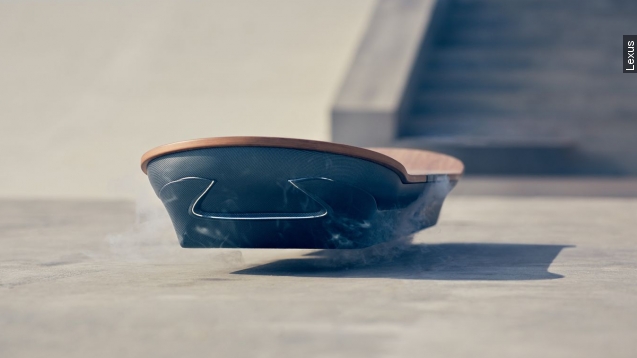 SMS
Reviewers Say Lexus' Hoverboard Doesn't Ride Like A Dream
By Leah Becerra
By Leah Becerra
August 4, 2015
Lexus' hoverboard has been tested, and it looks like yet another device that doesn't quite deliver what everyone was hoping for.
SHOW TRANSCRIPT

Hoverboards may be the future, but Lexus' version shows the future isn't very impressive yet.

The sci-fi staple has appeared in "Back to the Future Part II," "Doom Runners," "Futuresport" and more.

But it's 2015, and so far each attempt at creating the fated skateboard in real life has been kind of lame. (Video via Hendo)

Lexus has been teasing its version since June, and some tech reviewers have actually been able to try it out.

Jalopnik's Robb Holland also took the board for a spin, and he wasn't blown away.

"As bad as that looks, I'm the only one really to ride this so that makes me the best hoverboarder in the world," Holland said.

Neither was The Verge's Sam Sheffer.

"It's not as easy as riding a skateboard where all four wheels are on the ground. The magnetic track in the ground lines up vertically with the center of the board, so it's kinda like you're on a tightrope," said Sheffer.

That track he's referring to is probably why reviewers weren't completely on board. You see, the device uses superconducting magnetic levitation. Basically, it won't work at your average skatepark.

"A superconductor is something that when you cool it down — in this case we've liquid nitrogen — it loses all it's electrical resistance. ... You can see that it is actually levitating on the track," says a Royal Institution scientist.

Lexus' hoverboard works the same way, meaning the board's insides have to be kept extremely cold. Even then, it only works over metal tracks built into a special skatepark in Barcelona.

Knowing the board's limitations does make it lose some of the magic. But at least it's still pretty cool to look at.

This video includes music by Pierlo / CC BY 3.0.