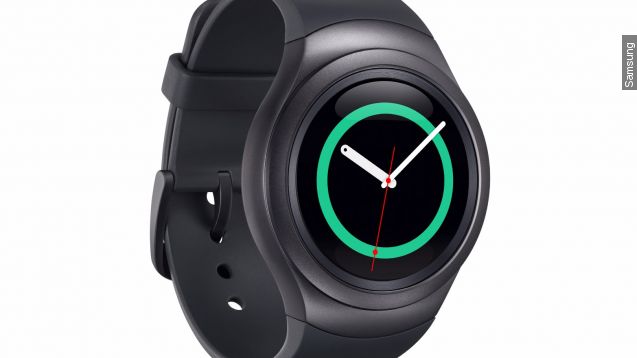 By Samantha Crook
September 3, 2015
Samsung revealed its latest smartwatch offering, and reviewers believe this is one smartwatch you might actually like seeing on your wrist.
SHOW TRANSCRIPT

Samsung showcased its new smartwatch Thursday, and it might look good enough for you to actually want to wear it.

The Samsung Gear S2 distinguishes itself from the competition with its round design and sleek body, unlike the square shape of Apple's offering and of earlier Samsung smartwatches. (Video via Samsung)

The Gear S2's visual appeal has already gotten some pretty positive attention from reviewers. (Video via The Verge)

Even before the showcase, the watch was praised for looking less awkward than other devices, a complaint against smartwatches since their inception.

"I hesitate to say that I totally hate it, but that's really not that far off," a reviewer said of a Pebble smartwatch for iTechTriad.

"In daily use, it's definitely ... present," a reviewer for Pocketnow said about Samsung's earlier Gear smartwatch.

Visually appealing design is crucial in setting smartwatches apart from each other, when a lot of similar features and apps are offered across devices. (Video via Samsung)

"My favorite feature is not really a feature, but it's just the design," Newsy's Mikah Sargent said in an Apple watch review.

Samsung's new watch will be offered in two different styles: the Gear S2 and the Gear S2 classic.

The classic looks more, you guessed it, classic — which could be attractive to people who aren't quite ready to be easily identified as smartwatch-wearers.

Samsung also announced a partnership with an Italian designer, who's on board to produce bands and faces for the device. (Video via Samsung)

Plus, the watch has a unique rotating bezel, which could be fun to play with!