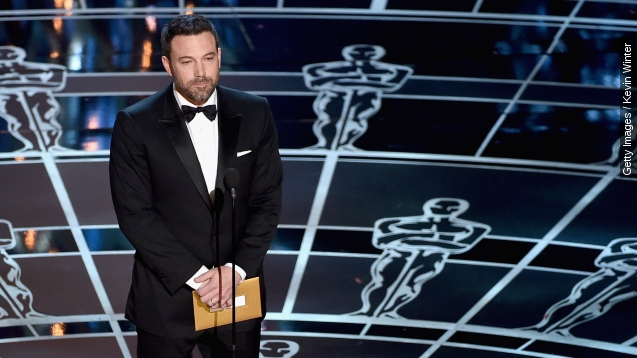 PBS has suspended the popular show "Finding Your Roots" after the revelation the show's producers omitted the fact one of Ben Affleck's ancestors owned slaves.

The decision is an about-face for PBS after more than two months of speculation over what would happen to the series hosted by Harvard professor Henry Louis Gates Jr. (Video via University of California Television)

"Did you ever hear these names?" Gates asked in the episode featuring Affleck.

"Almon Bruce French is an awesome name," Affleck said with a laugh. "And I wish I knew it before I had a son because that would've been his name."

The episode focused on several of Affleck's ancestors, including one interested in the occult and his mother, who marched for black rights during the Civil Rights movement in the '60s. (Video via PBS / "Finding Your Roots")

But six months after the episode aired, the Daily Mail published excerpts from the Sony email hack, which showed Affleck — a supporter of several civil rights causes — had asked that the slave-owning ancestor be omitted from his interview.

When Gates asked a Sony exec for advice about Affleck's request, the exec responded, "I would take it out if no one knows, but if it gets out that you are editing the material based on this kind of sensitivity then it gets tricky."

Affleck has since apologized for trying to take over editorial control of the show, writing on Facebook about his ancestry getting out: "I was embarrassed. The very thought left a bad taste in my mouth."

In a press release, PBS announced it's postponed scheduling the third season of "Finding Your Roots," is hiring a fact-checker and has deferred any decisions on a fourth season until the network is satisfied the show's editorial standards have been raised.