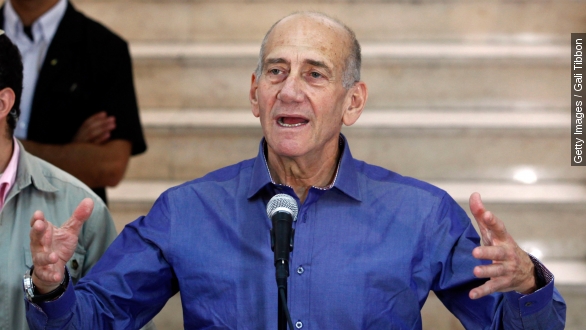 Olmert was convicted Monday of fraud and breach of trust for accepting under-the-table envelopes of cash from an American businessman. The donations, taken over a period from 1992 to 2005, totaled an estimated $600,000.

Monday's ruling marks the end of a seven-year legal battle over Olmert's finances. The former prime minister has been dogged by corruption allegations throughout his political career.

Olmert ascended to power in 2006 as the head of the centrist Kadima party, but he stepped down two years later to face the multiple corruption charges against him.

An indictment served in 2009 accused Olmert of participating in three big corruption incidents. Olmert was ultimately cleared on one of the cases and received a slap on the wrist for the other.

The third incident, the Talansky affair, involved American businessman Morris Talansky, who confessed to police in 2008 that he'd given Olmert envelopes of money in exchange for access when Olmert served as mayor of Jerusalem.

"What I saw, what I'm beginning to understand, is that it wasn't used for the proper purposes," Talansky told the police.

Despite Talansky's testimony, the courts exonerated Olmert of all charges in 2012, ruling there wasn't enough hard evidence to convict him. The ex-prime minister seemed ready to launch a political comeback. But then came the Holyland case.

The new indictment, filed in 2012, accused Olmert of accepting $160,000 in bribes, again during his time as mayor. The kickbacks were related to a real estate project begun in 1995 on Holyland Park; developers allegedly bribed officials to bend zoning laws in their favor.

Olmert was convicted on these charges last year and ordered to serve at least six years in jail. The incident also sparked the retrial of the Talansky case, after Olmert's secretary Shula Zaken agreed to take a plea bargain in exchange for evidence and testimony against Olmert.

The new evidence, which included recordings of conversations with Olmert, was enough to persuade the jury to find Olmert guilty the second time around. Sentencing is set for May 5, and he could face up to five more years in prison.

This video includes images from Getty Images and Adiel Io / CC BY SA 3.0.