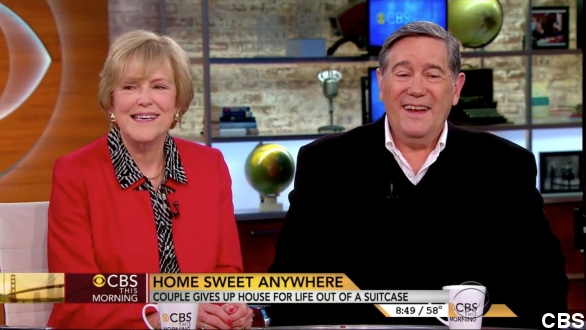 SMS
Retired Couple Travels The World As 'Vacationing Nomads'
By Katherine Biek
By Katherine Biek
April 15, 2014
After retiring, Lynne and Tim Martin sold their house in 2011 and have since spent their time traveling the globe and living in vacation rentals.
SHOW TRANSCRIPT

Can you imagine selling your house, packing the majority of your belongings into a storage unit and setting sail across the world? That's exactly what Lynne and Tim Martin did back in 2011.

And they even wrote a book about their adventures. In "Home Sweet Anywhere," the Martins chronicle everything including their trips to Turkish bazaars and visiting the pyramids in Mexico. (Via Amazon.com)

The vacationing retirees stopped by CBS to talk about what they call "home-free retirement."

"We don't have a home anywhere. We rent apartments and houses all over the world, everywhere we want to go. For long periods of time — at least a month." (Via CBS)

The Martins say it was difficult for their children and grandchildren to imagine their grandparents living all around the world, but they've since warmed to the idea.

Since selling their California home in 2011, the Martins have traveled to and lived in Mexico, Argentina, Turkey, France, Italy, England, Germany, Portugal and Morocco. (Via Maps of World)

Living in all those countries sure sounds like it would be expensive, right? Well, the couple told USA Today their travels haven't put too much strain on their wallet yet.

The Martins — who've been married for eight years — live on their investments, which total around $6,000 per month, along with Social Security and a small pension. The traveling pair also rotates between staying in ritzier cities like London and Paris and less expensive ones such as those in Portugal and Morocco.

Living in these foreign countries isn't always as glamorous as it might seem, though. Lynne, who blogs for The Huffington Post, recently wrote about one huge difference between their vacation homes and housing in the U.S.

The kitchens are often nonexistent in these foreign vacation homes and apartments. Twice, the Martins have stayed in homes with no oven; several homes have had Barbie-sized sinks and refrigerators; and more often than not, appliances haven't worked.

The Martins are currently living in New York City before they fly off to Paris in June. After that? Lynne and Tim don't know yet — they do call themselves "nomads," after all.