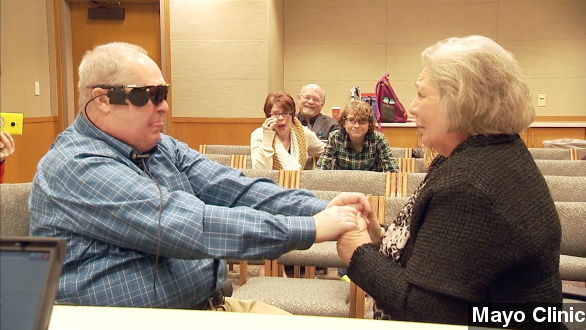 That's what it sounded like when Allen Zderad saw his wife's face for the first time in a decade, thanks to a retinal prosthesis installed at the Mayo Clinic. (Video via Mayo Clinic)

The Argus II is the retinal prosthesis the clinic used, and it allows some people who have lost their sight to regain their vision, in a way.

Zderad suffered from an inherited disease that damaged photoreceptors in his eye and, over the course of 20 years, gradually reduced his vision. (Video via Mayo Clinic)

What the Argus II does is relay images from a camera on the device to a little portable computer, which translates them into visual images a transmitter can then send to an implant in the user's retina. (Video via Second Sight)

The brain has to learn to interpret those signals, so what the user tends to see is primarily light and changes in light, although the brain's ability to interpret the signals improves over time. (Video via Al Jazeera)

The Argus II uses technology primarily developed at the Duke Eye Center starting in the 1980s. The university used it on its first patient back in October. (Video via Duke University)

The FDA approved the Argus II in February of last year, but it warns the device isn't effective for some visual impairments including optic nerve disease, central retinal artery or vein occlusion, or for people with a history of retinal detachment.

Second Sight's CEO told Bloomberg the company is looking to address that.

"With this new fundraising, we're planning on doing additional R&D not only to improve the quality of vision for folks like Larry but to expand it to other forms of blindness, eventually to all forms of blindness," Robert Greenberg said.

Zderad is the first person in Minnesota to use the device and only the 15th person in the country.