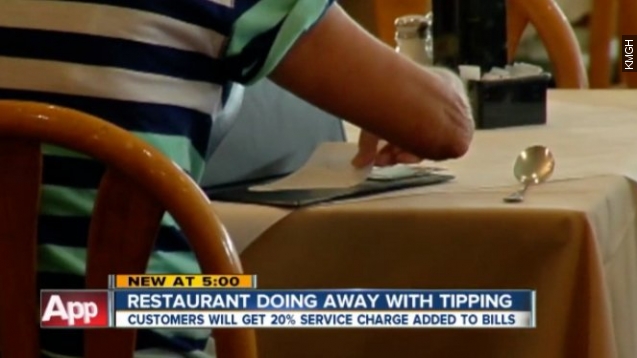 SMS
Restaurant Says New 20 Percent Service Charge Isn't A Tip
By Ryan Biek
By Ryan Biek
July 8, 2015
A restaurant in Colorado said it will soon give its servers a substantial raise. However, the new system bans tips, but can that be enforced?
SHOW TRANSCRIPT

"There was a time it was just really slow for a whole week. And, you know, as a server you're not making money when people aren't coming in, and it was really difficult," server Michele Spatola told KMGH.

According to Newsy's partners at KMGH, servers at the Italian restaurant Abrusci’s in Colorado will soon be making $20 an hour, compared to the old rate of $5.21. Servers can also expect paid vacation and sick days. And to top it all off, 20 percent service charges are guaranteed.

The restaurant's owner Nancy Progar told KMGH, "We were trying to help them, all of our staff, earn a livable wage. Then we started to see this trend across the country where a lot of restaurants are going to no tipping."

But while the restaurant says its system bans tips, many customers are seeing it more as forced tipping.

When KMGH posted the story to Facebook, one viewer commented: "I wouldn't go to a restaurant who automatically charges a 20% service charge. We always tip at least 20% but we do it voluntarily and it is based on good service!!" As of Wednesday morning, that comment had received more than 600 likes.

Getting away from personal views over how much to tip or whether or not to tip in certain circumstances, some viewers said the restaurant could simply raise the prices of its dishes and not accept tips.

The restaurant's owner did argue that, with time, servers' performances will fall in line with customers' expectations of what merits 20 percent tips.

She said: "Servers won't be trying to take as many tables as they can. They’ll actually deliver high quality, top-notch service to every table."

The restaurant's new "no tipping" system is set to start July 20.