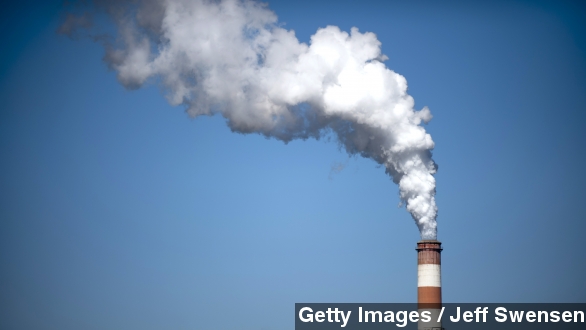 Two degrees Celsius — that's how much global warming can happen before reaching catastrophic levels of climate change, according to the international community.

To avoid that threshold, countries have pledged to make green reforms, use more renewable energy and cut their use of fossil fuels. (Video via U.S. Department of Energy)

Now new research is out that details exactly how much countries will need to cut that use in the coming years.

The letter looks at the remaining fossil fuel reserves available and how much of those reserves the world can use before reaching that 2-degree limit — 2 degrees above the preindustrial global average.

It says that globally, a third of oil reserves, half of natural gas reserves and more than 80 percent of the world's coal reserves must remain unused until 2050 to meet that goal. (Video via Maersk, The Guardian)

The letter goes on to say world leaders currently appear to be trying to use up their natural resources as quickly as possible and the cuts would have a big impact on the current energy sector.

And that's a point The Guardian fixed on, writing, "Major fossil fuel companies face the risk that significant parts of their reserves will become worthless."

Some of the regions most affected by the proposed limits, according to the research, include Canada — which would need to drop its tar sands oil production to in a big way after 2020. (Video via CCTV)

That's despite the current push to finish expanding the Keystone Pipeline, which would streamline transport of oil from Alberta to refineries in the Gulf of Mexico. (Video via TransCanada Corp.)

But the region with the largest amount of fossil fuels that would have to remain unused is the Middle East, which would have to leave a little more than 260 billion barrels of oil unburned by 2050 — about the same as Saudi Arabia's oil reserves in 2013, according to OPEC. (Video via Shell)

The United Nations is spearheading the worldwide effort to limit global warming to 2 degrees Celsius. The group is organizing a major conference to come up with an international agreement in Paris this December.