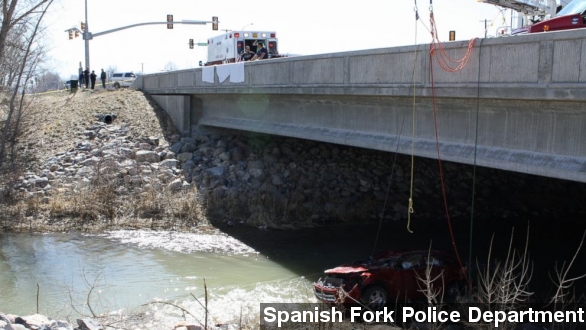 A toddler named Lily is in critical condition after a car accident, but it's miraculous that she survived at all. Investigators think the 18-month-old was in an icy Utah river for about 13 hours.

Her mother was found dead at the crash scene, so here's what's really eerie: Rescuers said they heard a call for help from the car.

"To me it was plain as day. I remember hearing a voice. It didn't sound like a child. Just saying, 'Help me,'" a responder said.

Again, Lily's 25-year-old mother was dead when investigators found her. Her car had gone over a bridge and couldn't be seen from the road. A fisherman spotted it Saturday, but it's believed Lily and her mother had been upside down in the water since Friday night.

"This was a very dramatic rescue to get Lily out of that submerged vehicle in a very icy Spanish Fork river. A total of seven emergency responders — three police officers and four firefighters, ultimately had to be treated for hypothermia," KSTU reports.

"Grabbed the baby in my arm, raised its head up out of the water as I tried to release the seat belt," said one responder.

Lily was stuck upside down in her car seat. It's unclear why the accident happened.

According to ABC, rescuers jumped into the water and tipped the car on its side, and the water was so intensely cold they could only stay in it for short bits of time.

Lily's family has set up a GoFundMe page for her medical care and for her mother's funeral expenses.