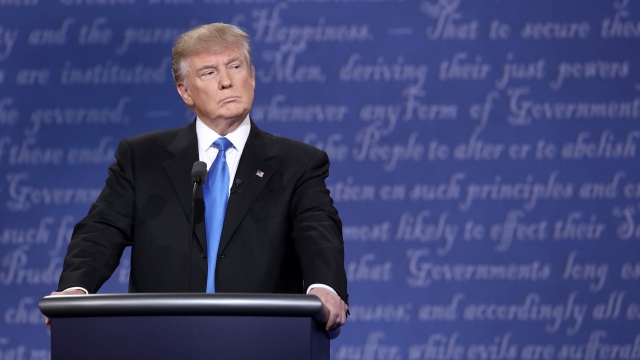 SMS
Republicans Have Taken A Step Back From Trump After That Video Leak
By Lindsey Pulse
By Lindsey Pulse
October 8, 2016
House Speaker Paul Ryan said he was "sickened" by Donald Trump's comments in the recently released video clip.
SHOW TRANSCRIPT

Just hours after a tape from 2005 surfaced showing Donald Trump joking about groping women, leading Republicans began pulling away from the presidential nominee.

In the tape obtained by The Washington Post, Trump describes seducing a married woman and touts using his power of celebrity to hit on women. He's talking with then Access Hollywood correspondent Billy Bush.

Even some of Trump's loyal backers from the GOP aren't trying to defend what he said. Despite his public apology — which critics say wasn't really an apology at all — many have denounced the business mogul's comments.

House Speaker Paul Ryan said through a spokesperson he was "sickened" by Trump's words and that women are to be "revered, not objectified."

Several other party members have called for Trump to drop out completely. Former Utah Gov. Jon Huntsman told The Salt Lake Tribune "the time has come for Governor Pence to lead the ticket."

And Sen. John Thune said, "Mike Pence should be our nominee effective immediately."

Trump told The Wall Street Journal on Saturday that there was "zero chance" of him dropping out. Besides, it's probably too late for the GOP to actually replace him. The video leak came roughly 30 days ahead of the election and — as some outlets have pointed out — more than 34,000 Republicans have already cast their ballots as early voters.

Not all of these responses equal a withdrawal of support, just a denouncement of Trump's comments — though several responses have gone that far.

Utah Gov. Gary Herbert pivoted on his previous endorsement of Trump saying on Twitter that the comments are "beyond offensive & despicable."

And Sen. Kelly Ayotte tweeted she would be "writing in Governor Pence for president on Election Day."