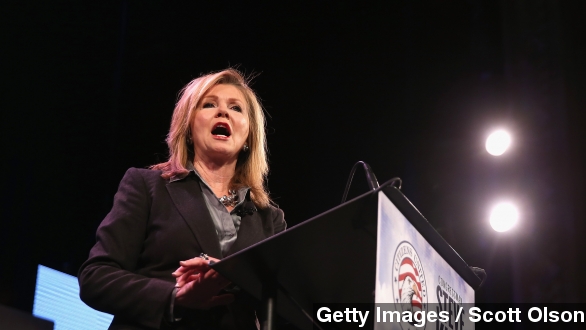 SMS
Republicans Propose Bill That Would Kill Net Neutrality
By Evan Thomas
By Evan Thomas
March 5, 2015
The bill proposed by Tennessee Rep. Marsha Blackburn would roll back the existing and any similar future net neutrality rules from the FCC.
SHOW TRANSCRIPT

Less than a week after the FCC voted in favor of new net neutrality protections, members of Congress are already moving to nullify those rules.

"All in favor say aye. Opposed? The ayes have it," FCC Chairman Tom Wheeler said during February's vote. (Video via C-SPAN)

The bill is just two pages long and gets right to the point:

The FCC's newly enacted broadband rules "shall have no force or effect, and the Commission may not reissue such rule ... unless the reissued or new rule is specifically authorized by a law enacted after the date of the enactment of this Act."

Blackburn, whose campaign donors include political action committees for AT&T, Verizon and Comcast, said the legislation "will put the brakes on this FCC overreach and protect our innovators from these job-killing regulations." (Video via C-SPAN)

While this bill in particular is news, the net neutrality backlash it represents is not.

Legal and legislative challenges to the FCC's new stance were widely expected, both by those watching and by those who will feel the effects.

"There will be litigation. It's quite certain that that would be the case," AT&T CEO Randall Stephenson told CNBC.

FCC Chairman Tom Wheeler is confident the new rules will weather the storm. Back in 2014, the courts held that to regulate ISPs like common carriers, the FCC had to classify them as such.

In any case, Blackburn's bill will have to make it out of the House and Senate before it can really threaten the FCC's new rules, which won't go into effect until 60 days after they're recorded in the Federal Register.