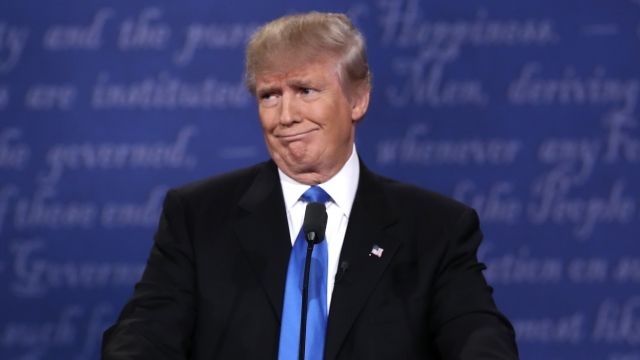 By Eugene Daniels
October 18, 2016
And it's because Trump's popularity with Mormons is abysmal.
SHOW TRANSCRIPT

The American electoral map has changed quite a bit since the '60s, but there's one thing that's stayed the same: Utah is a deep red GOP-loving state. As a matter of fact, every single Republican since 1968 has won the state. But it looks like Donald Trump could be putting that streak in jeopardy this year.

Anything but a huge Trump win in Utah would be a big deal. The last time a GOP nominee won with less than 20 points was during the 1992 election. And it all can be boiled down to Trump's relationship with Mormons in Utah.

Trump just rubs most Mormons the wrong way, despite his apparent love for them. A recent poll found 73 percent of Mormon voters say Trump doesn't share their values. That bleeds into his overall state-wide favorability, which sits at 71 percent.

And those numbers came out before the leaked video showing Trump bragging about sexual assault. Since then, it's gotten worse. Utah's lawmakers began to jump ship or call on Trump to leave the race. And a paper owned by the Mormon church did the same, even calling Trump's words "evil."

And then there's this guy: Evan McMullin, an independent presidential candidate and a Mormon who is peeling off serious support from Trump in Utah. He's only trailing Trump by 6 points among Mormons, and that's with essentially no name recognition.

It's hard to tell if flipping Utah is actually possible for Hillary Clinton or McMullin. There hasn't been a poll showing Trump actually losing — he's just dangerously in the margin of error. But even the fact that one of the reddest states in our union is in play proves, once again, 2016 has flipped everything we thought we knew on its head.