Republicans Control Congress, So Will They Work With Obama? 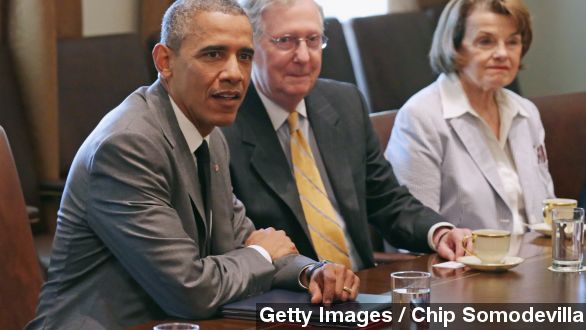 Like George W. Bush, Bill Clinton and Ronald Reagan before him, come this January, President Obama will face a unified Congress run by the opposite party.

The question now is whether this new roster of lawmakers and President Obama can find common ground on anything during his final two years in office.

The prospects don't look good. After all, if a Congress partially-run by Democrats couldn't push through Obama's priorities, what's to say a Congress entirely run by Republicans will? (Video via The White House)

As a result, we can expect executive action from the president on at least one issue. He’s promised he’ll act without Congress, if necessary, on immigration reform. (Video via The White House)

And if history's any indication, Obama will be pulling out the veto pen more often — something he's done only twice since taking office (Video via The White House)

Repealing, or at least replacing parts of, Obamacare remains high on the agenda of some Republicans, including Texas Senator Ted Cruz.

He recently told The Washington Post Republicans should “pursue every means possible to repeal Obamacare" — a unlikely scenario that would face a certain veto from Obama.

Which is probably why Mitch McConnell — who could be the next Senate Majority Leader — has tempered expectations on that one. And that's why a Republican takeover in the Senate might not be that consequential. A supermajority of 60 members is required to get most significant things in Congress done — and that’s something the GOP still doesn’t have.

Which isn't to say there's no room for compromise. As Gerald Seib as The Wall Street Journal writes, the current political makeup provides the ideal atmosphere for doing so. "When they have to compromise, it’s easier to say, “Hey, we had no choice. We have to put up with the other side.”

But that "Do Nothing Congress" nickname will likely still be very relevant.

The Washington Post looked at the history of legislative performance and party control, and found that, on average divided governments — like the current situation —  have gotten far less accomplished than ones ruled by a single party. No surprise there.

If the president does give some ground to Republicans, it'll likely be on business issues: building the Keystone XL pipeline, free trade agreements and lowering corporate tax rates.