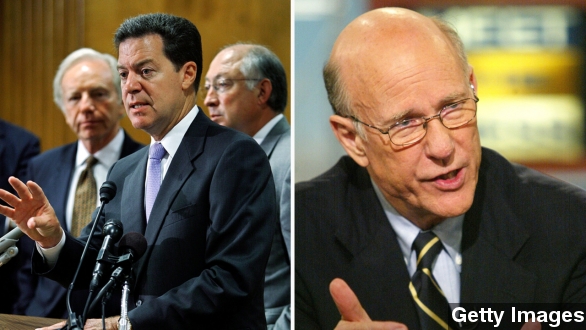 Kansas isn’t just considered a reliably red state — but deep red. As in, it hasn’t elected a Democrat to the U.S. Senate since the 1930s. And President Obama lost by over 20 points there in the last election.

Which is why it’s pretty significant Gov. Sam Brownback and Sen. Pat Roberts — both Republicans — each came so close to defeat Tuesday night.

“When I started as governor, we had a bad situation.”

Brownback, once a U.S. senator, has held elected office for past 20 years. (Video via Brownback For Governor)

But Tuesday, Democrat Paul Davis came close to unseating him in a tight race, despite a comparably low profile. “Kansas can do better than Gov. Brownback.” (Video via Paul Davis For Governor)

Davis capitalized on Brownback's unpopular tax and spending cuts. And although the governor had alienated even many conservatives who found his economic agenda extreme, he still managed to walk away with a narrow win Tuesday night.

And in another high-profile race, Kansas Republicans scored an important win.

Orman was a newcomer on the scene and lacked the backing of any major party. As an independent candidate, he fashioned himself as a politician that could rise above the fray. (Video via KSHB)

“Washington’s stuck between two parties who care more about winning than they care about our country.” (Video via Greg Orman For U.S. Senate)

Roberts might have received an unintentional last-minute bump from Joe Biden of all people.

On Election Day, Biden told a Connecticut radio station Orman would caucus with the Democrats — despite Orman refusing to say whether he’d do so. And Republicans ran with the story.

In a cycle when so much went right for Republicans, it might come as a surprise how close Kansas came to breaking with the GOP. But for the next few years at least, it'll stay red.