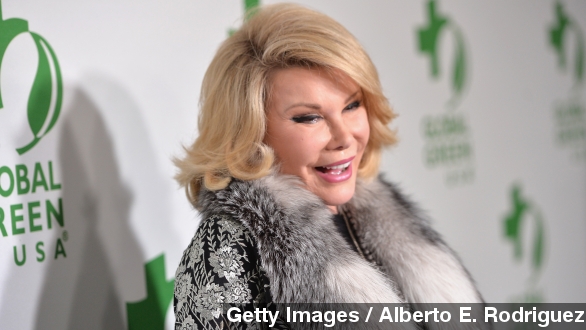 A new federal report says the clinic where Joan Rivers stopped breathing in August is responsible for several errors.

According to the Los Angeles Times, the report says the clinic...

-Didn't notice her blood-oxygen level was dropping below normal

It also confirms the rumor that a cellphone picture was taken of the iconic comedienne while she was sedated.

NBC has a telling direct quote from the report, which comes from the New York Department of Health and Human Services— the clinic "failed to identify deteriorating vital signs and provide timely intervention."

Eighty-one-year-old Rivers stopped breathing during an August 28 procedure. Resuscitation was attempted, though the report says there's conflicting information on when it was started. (Video via IFC Films / "Joan Rivers: A Piece of Work")

She was taken to a hospital, and then taken off life support September 4. That failure to identify that she'd stopped breathing might have been key.

According to the National Library of Medicine, permanent brain damage can begin if the brain is without oxygen for as little as four minutes.

TMZ is reporting additional details from the report — saying Rivers was given twice the amount of Propofol she should have had, and that her personal doctor had that photo taken because she thought Rivers might have wanted a photo.

Yorkville Endoscopy is still up and running though it has parted ways with some of its staff since the incident.

In mid-October, the New York Medical Examiner ruled Rivers' cause of death was a "predictable complication" from a medical procedure.

It's unclear what this report might mean for Yorkville Endoscopy from here on out.

But Rivers' daughter, Melissa, is reportedly considering a wrongful death lawsuit against the clinic.