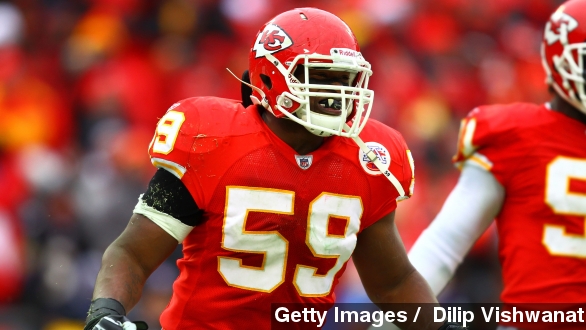 KSHB: "Whatever drove Jovan Belcher to kill the mother of his child drove him here in remorse. ... As police started to arrive, Belcher started walking away, fell to his knees, and ended his life."

Now, ESPN reports the young linebacker, like many NFL players before him, showed signs of chronic traumatic encephalopathy, or CTE.

ESPN's investigative reporting show "Outside The Lines" says the neuropathologist who examined Belcher's brain after his death found, "detected neurofibrillary tangles of tau protein, which is identified with chronic traumatic encephalopathy. The tangles were distributed throughout Belcher's hippocampus, an area of the brain involved with memory, learning and emotion."

Belcher played college football at the University of Maine and signed with the Kansas City Chiefs in 2009. There he played nearly three years until his death in December 2012 when he shot himself in front of then-head coach Romeo Crennel and General Manager Scott Pioli.

But, sadly, Belcher's story has the same ending as several other former NFL players who took their own lives after playing for years in the NFL and reportedly suffering traumatic brain injuries.

In July, a federal judge approved a settlement between the NFL and former players and players' families. The original settlement of $765 million was agreed to in 2013, but a judge later halted that believing it wouldn't be enough money. The NFL agreed to remove the cap on the payout.

Belcher's case also highlights another big issue ongoing in the NFL — domestic violence. Belcher was 25-years-old when he died. His girlfriend, Kasandra Perkins, was 22.