MH370 Was Out Of Control When It Descended Into The Ocean 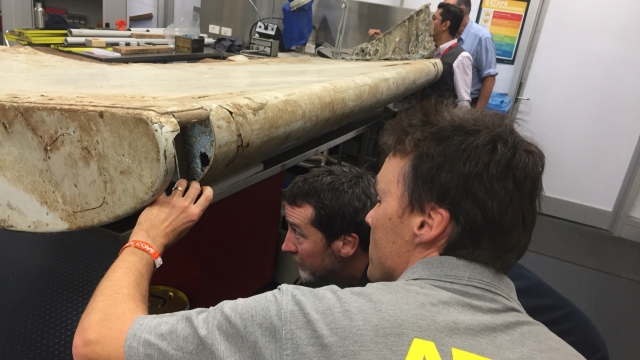 SMS
MH370 Was Out Of Control When It Descended Into The Ocean
By Katherine Biek
By Katherine Biek
November 2, 2016
Analysis by the Australian Transport Safety Bureau shows the Malaysia Airlines plane was likely spiraling as it crashed into the ocean in 2014.
SHOW TRANSCRIPT

Malaysia Airlines Flight 370 was making a rapid "uncontrolled descent" when it plunged into the Indian Ocean in March 2014.

That's according to a new report released Wednesday by the Australian Transport Safety Bureau. It's leading the search for the missing Boeing 777.

The ATSB analyzed two wing flaps that have been recovered and found at least one was "most likely in the retracted position" when it came apart from the plane.

This means the flap wasn't extended and ready for landing when the plane hit the ocean.

SEE MORE: A Fire May Have Broken Out Before Flight MH370 Crashed

Extending that flap is something a pilot likely would have done to try to control the plane. So it's possible no one was flying MH370 when it crashed.

"The really important news in this report is that the flap found in Tanzania was stowed. Therefore there was no way this airplane was being flown by anyone," aviation expert Geoffrey Thomas told CNN.

A series of ATSB simulations determined the plane was most likely spiraling as it fell as fast as 25,000 feet per minute.

The report notes more debris could be found north of the current search area because of drifting patterns.

The plane's fuselage has still not been recovered. Two hundred thirty-nine people were on board MH370 when it disappeared on its way from Kuala Lumpur to Beijing.