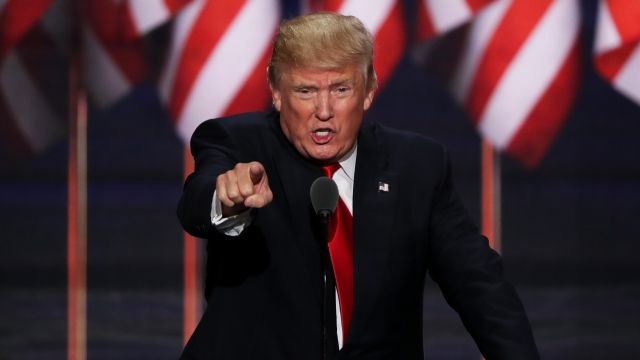 Donald Trump has continued to say he would never take the nuclear option off the table. For example, he told Bloomberg: "I'm never going to rule anything out."

Comments like that make people  — including Congressman Ted Lieu — a little worried about what Trump would do with a big, red nuclear button.

"Whether you supported Obama or McCain or Romney or Bush, you didn't think they were crazy," Lieu said when he sat down with Newsy.

Lieu is sponsoring a bill to stop the president from having a first-use nuclear option.

"If you look at what it takes to launch nuclear weapons, it doesn't take a lot. It takes what's called the approval of the National Command Authority," Lieu said.

"There is just no military strategy for which that serves any useful purpose," Lieu said.

But for Lieu, anything other than his bill gives too much power to any president — especially if it were Donald Trump.

"People are looking around wondering, 'Huh, if he were president, what would it take to launch a nuclear weapon?' And under current nuclear launch approval process, it doesn't take very much," Lieu said.

But even if Trump's candidacy prompted this bill, Lieu says it's not all about Trump. It’s about Congress being the only branch that can declare war.

"The current process is just flat out unconstitutional. The framers of the constitution would never have authorized this scenario. There is no way they would have said a nuclear first strike does not mean war. Because it does mean war," Lieu said.