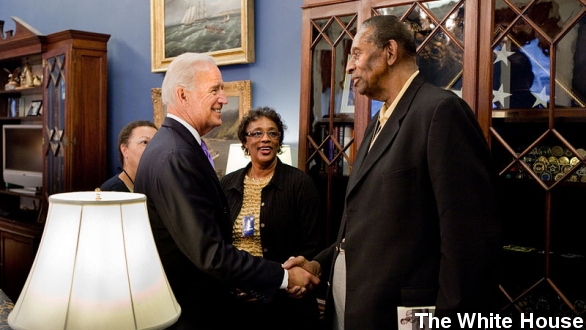 SMS
Remembering Earl Lloyd, NBA's First Black Player
By Cliff Judy
By Cliff Judy
February 27, 2015
Earl Lloyd said anyone who compared him to Jackie Robinson was "crazy," but his contributions to basketball are undeniable.
SHOW TRANSCRIPT

Basketball has lost one of its greatest pioneers. Earl "Big Cat" Lloyd was the first black player, the first black bench coach and the second black head coach in NBA history.

West Virginia State University — a historically black university and Lloyd's alma mater — announced he passed Thursday at the age of 86.

Lloyd was one of four black players drafted into the NBA in 1950, but he was the first man to appear in a game. He played nine seasons in the league and also shared the title of first black player to win an NBA championship with then-teammate Jim Tucker in 1955.

In the 1950s sports world, professional basketball didn't carry nearly the importance of today's game with superstars that are household names right alongside baseball and football stars.

CBS Sports anchors lamented that Friday as they pointed out few sports fans even know the name of the man who broke down such an important barrier.

"Those men went through everything and maybe worse because of where those sports were played throughout the country," Craig Carton said.

The comparison the anchors were making there — and the one everyone naturally defaults to for Lloyd — is Jackie Robinson, who broke baseball's color barrier three and a half years before Lloyd played.

That was actually a comparison Lloyd didn't think was fair. Lloyd once told the Associated Press anyone who compares him to Robinson is "crazy."

NPR has published several full interviews with Lloyd — all of them worth listening to, by the way. He told the outlet Robinson had it tougher because Robinson's game was higher-profile than basketball, and baseball players could yell at Robinson from across the field and be fairly confident they wouldn't have to confront him.

"But in pro basketball," Lloyd told NPR, "you're standing on the foul line and some guy who might want to call you a name is less apt to because the proximity is kind of immediate. There's a little danger involved in calling a guy a name who's standing right next to you."

As a child who grew up in Alexandria's segregated schools, Lloyd's name now dons the basketball court at T.C. Williams High School in Virginia. You may remember T.C. Williams as the high school immortalized in the movie "Remember The Titans."

Lloyd also co-wrote his memoir "Moonfixer," in which he called his career an "incredible journey."

"It's incumbent upon each watch, when you play your 10, 11 years and you're in your group," Lloyd said, "when you leave, I truly hope that you've done all you can possibly do to leave it a better place for the folks who come behind you."