Remember Keystone XL? Delayed Pipeline Back In The Spotlight 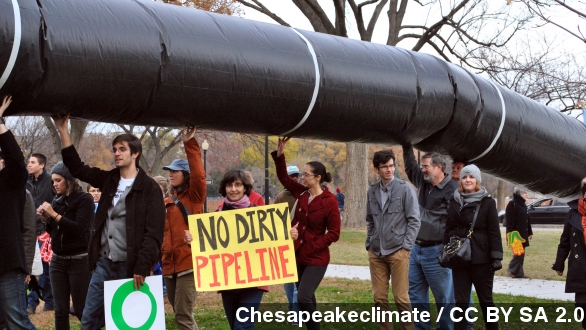 A years-old political conflict has gained new life this week, after the House passed a bill to approve construction of the Keystone XL pipeline. A Senate vote on the issue is expected to follow shortly.

But it's been a while since the pipeline was in the political spotlight. So in case you're a little lost on the fine details of this debate, here's a quick refresher about what Keystone XL is, how it got so controversial, and where the pipeline stands today.

The Keystone Pipeline system is a series of oil pipelines run by TransCanada, which mainly connects oil in Alberta to refineries and distribution plants in the U.S. Two stages of the project are already complete, and a third is almost complete.

TransCanada wants to add a fourth leg to the system —the Keystone XL — which will directly connect Alberta's oil fields to Steele City, Nebraska, essentially replacing part of the original pipeline.

But since Keystone XL crosses the border between Canada and the U.S., it requires approval from the U.S. Department of State. And that's where all the trouble started.

A lot of prominent environmentalists objected to the construction of Keystone XL, citing its reliance on extracting oil from carbon-heavy tar sands, and the potentially catastrophic environmental consequences of a spill.

Defenders of the pipeline argue the environmental impact has been drastically overinflated and contend the project will bring significant economic benefits to the U.S.

Facing political pressure from both sides, President Obama punted the decision down the road, saying the project needed more scrutiny from the State Department and the Environmental Protection Agency. It's a move that's kept him on the fence of the issue for six years.

PRESIDENT OBAMA VIA THE WHITE HOUSE: "On Keystone, there's an independent process, it's moving forward, and I'm going to let that process play out."

But the president can't afford to wait any longer — Republicans will control Congress in 2015, and the GOP is taking full advantage to force the issue through to the president's desk.

As one Slate writer noted, Obama's choices are win-win for Republicans. "If Obama signs their bill, the GOP can point to the pipeline as proof they're delivering on their campaign promises. If the president vetoes it, he allows the GOP to argue ahead of 2016 that it's the Democrats who are responsible for the gridlock in Washington."

The Senate is also set to pressure Obama to make a decision. The chamber's Democrats plan to vote on a Keystone bill Tuesday in an effort to save embattled Sen. Mary Landrieu, whose home state of Louisiana is a big fan of the project.

Complicating all of this is the recent plummet in crude oil prices, which could make it economically unfeasible for TransCanada to start work on Keystone XL. One analyst told USA Today: "The reality is tar sands crude only makes sense in the world of expensive oil. That's not the world we're likely to be in in the near or immediate future."

And the political battle over Keystone XL might not end with the president, either. The project's future is also tied up in Nebraska's court system, where the governor's authority to approve the pipeline route is being challenged.