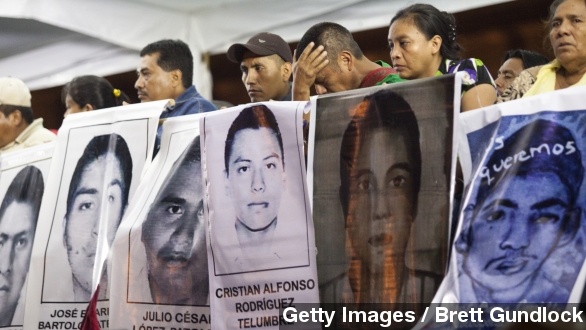 Authorities have identified the remains of one of 43 missing students in Mexico, from ashes taken from a dump.

The family of the student, Alexander Mora, told outlets authorities informed them an investigative team from Argentina managed to confirm the remains were Mora's. (Video via Univision)

The discovery lines up with the prosecution's account of events, namely that the gang members who allegedly killed the students later burned them and left the ashes at the dump. (Video via CNN)

The students disappeared in the town of Iguala back in September, after driving from the countryside to protest what they said were unfair hiring policies by the government. (Video via VICE)

The prosecution says police shot at the students' buses, and detained some of them, before turning them over to the gang members to be killed. (Video via Noticieros Televisa)

The alleged collusion between the cartel and the local government and the uncertain fate of the students have sparked protests throughout the country.

There is the perception in Mexico that the kind of collusion that allegedly happened between the government and criminals is common, which has put the country's president at the center of the anger. (Video via Office of the President of Mexico)

Enrique Peña Nieto is seeing his lowest approval ratings ever, and many activists have called on him to resign.

But as Francisco Goldman wrote for The New Yorker, the damage has gone beyond Peña Nieto, as his party the Institutional Revolutionary Party stretches to defer responsibility, blaming the students' disappearance on a conspiracy to overthrow the government.

The New Yorker points to an op-ed a veteran party member wrote alleging the students were actually a guerrilla group at war with the cartel, as an example of how the PRI is spinning the disappearance.

Officials with the investigation have yet to publicly confirm the identification of the remains.