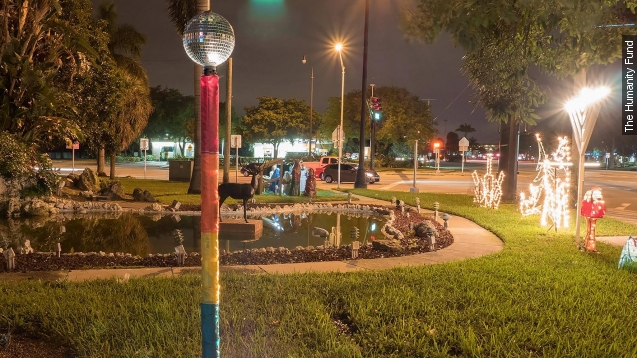 Wreaths and decorations are everywhere during the holiday season, but one Florida man is trying to introduce a new kind of decoration to state capitals all across the country.

Chaz Stevens and his group, The Humanity Fund, are attempting to decorate as many government buildings as they can with what they describe as a gay pride Festivus pole.

The poles are six-and-a-half-feet tall, draped in a pride flag with an 8-inch disco ball on top.

Festivus is the holiday popularized by "Seinfeld" as a secular day where loved ones can air their grievances around an aluminum pole. Stevens says he has a big grievance against states that he says actively promote Christianity instead of separating church and state. (Video via NBC)

"In December of 2013, I felt the religious symbols being displayed in the state of Florida capitol rotunda building were showing the state’s endorsement of a certain viewpoint. So I forced the state of Florida to allow me to erect a Festivus pole," Chaz Stevens said. (Video via The Humanity Fund)

State capitol buildings have been a holiday battleground as groups who are fed up with displays featuring only Christian symbols have demanded equal access to promote whatever agenda they want.

So The Humanity Fund got permission to erect the gay pride Festivus poles in Washington, Illinois, Missouri, Michigan, Oklahoma, Georgia and Florida this year, though not without some backlash.

Some lawmakers in Oklahoma said the pole is offensive to Christians and should be removed, even though it was legally approved.

Oklahoma Rep. David Brumbaugh told KWTV: "Just because something meets the legal criteria, doesn't mean that it is wise to approve every request. This is just another example of the continued war on Christmas."

But Stevens says he has no intention of stopping his mission to promote Festivus cheer while making a tongue-in-cheek point about free speech. (Video via WTVT)