Religions Are Putting Aside Their Differences For Ramadan 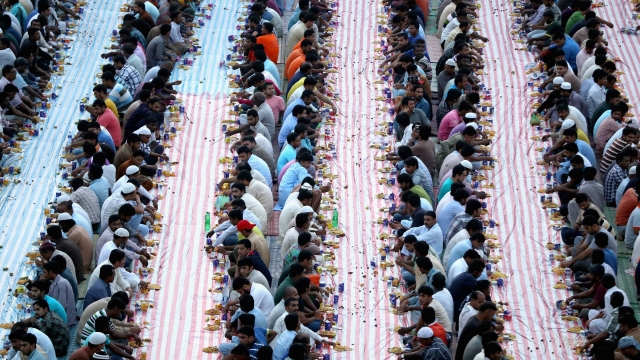 SMS
Religions Are Putting Aside Their Differences For Ramadan
By Melissa Prax
By Melissa Prax
June 26, 2016
Ramadan is a Muslim holy month, but other religious groups around the globe are helping celebrate.
SHOW TRANSCRIPT

Around the world, Ramadan is giving religious groups an opportunity to bridge cultural divides.

During the holy month, observant Muslims don't eat any meals or drink liquids from sunrise to sunset. But once the sun goes down, they eat "iftar," or a meal to break the fast.

The meal serves to connect Muslim families with the community, which is why other religious groups see it as the perfect opportunity to reach out.

A Catholic church in the United Arab Emirates welcomed in 500 Muslims to eat a meal after sunset. It was the first time the church had ever hosted a Ramadan event.

Buddhist monks in Bangladesh handed out iftar to poor Muslims. It's a project they started six years ago, in spite of a big cultural divide and tensions between the two groups there.

And in the largely Hindu country of India, the southern state Andhra Pradesh also held an iftar event. Several leaders participated even though they're Hindu.

Correction: A previous version of this video characterized Ramadan as a holiday. It's actually a holy month. This video has been updated.