Religion Probably Isn't The Best Line Of Attack For Trump 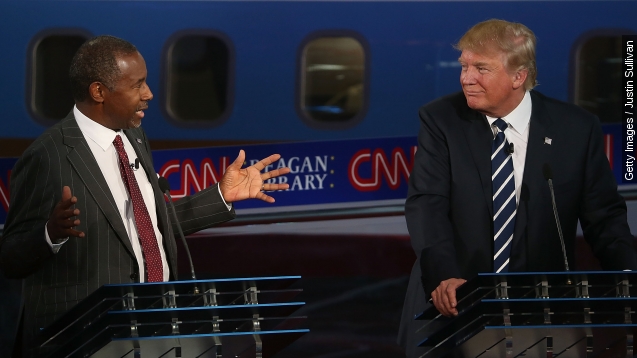 That was Donald Trump, raising the issue of religion to separate himself from rival and Seventh-day Adventist Ben Carson.

History has shown that's not always a great tactic.

Trump has since denied that his unprompted comments on Carson's faith were an attack, but they might've sounded familiar to political observers. (Video via MSNBC)

Mike Huckabee told The New York Times Magazine in 2007: "I really don’t know much about it. ... Don't Mormons believe that Jesus and the devil are brothers?"

That was in response to a question about Mitt Romney, a Mormon, who at the time was Huckabee's biggest rival. While Huckabee's evangelical roots helped him win the Iowa primary, he was easily beaten nationally by John McCain. (Video via Romney for President, Inc.)

That shows on the national stage, a candidate's religion isn't as important. A recent CBS News poll found 54 percent of Americans don't think it's important for a candidate to share their religious beliefs.

Of course, every U.S. president ever has been involved with Christianity in some shape or form, but beyond that, the specifics haven't been a big issue since John F. Kennedy's election, as the first (and only) Catholic president. (Video via The George W. Bush Presidential Center)

"That's a very big part of who I am, humility and the fear of the Lord. I don't get that impression with him," Carson said during a press event.

It's worth mentioning Carson's touched on Trump's faith before, but never as explicitly as Trump did Saturday. (Video via C-SPAN)

And odds are, even if most voters are in the same boat as Trump —

— that likely won't, in and of itself, be a problem.