Reid Doesn't Hold Back On Senate Floor Rant About Trump 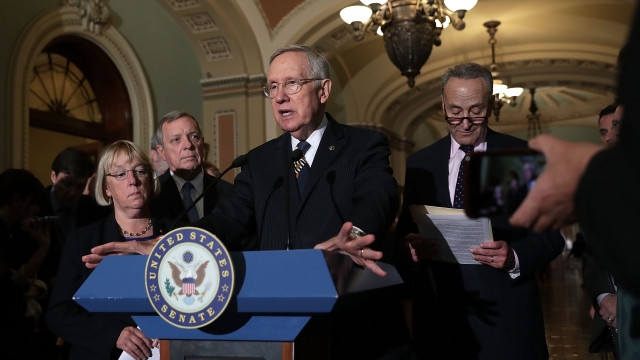 The Senate was back in session Tuesday. But before getting down to business, Senate Minority Leader Harry Reid had a few things to get off his chest.

"A man who lost the election by 2 million votes — or more — is now the president-elect," Reid said at the beginning of his speech on the Senate floor.

Citing reports of an increase in hate crimes since the election, Reid said, "We have the responsibility to be the voice of millions of Americans sitting at home, afraid that they're not welcome anymore in Donald Trump's America. We have the responsibility to prevent Trump's bullying and aggressive behavior from being normalized in the eyes of America."

"As long as a champion of racial division is a step away from the Oval Office, it will be impossible to take Trump's efforts to heal the nation seriously," Reid said.

Reid doesn't have anything to lose by making those statements. He's retiring soon, and his seat will stay in Democratic hands. But one of his Republican Senate colleagues wasn't amused.

"He does nothing to contribute to the healing of our country after a very polarizing, hotly contested election by continuing to pile on the president-elect and his team," Senate Majority Whip John Cornyn said.

Cornyn said the American people voted, and Reid's decision to "continue to disparage their choice for the next president, as well as the leadership of the House and the Senate, really just smacks of — well, we used to call people like that sore losers."

It's a bitter start to the Senate's latest session. So, business as usual.