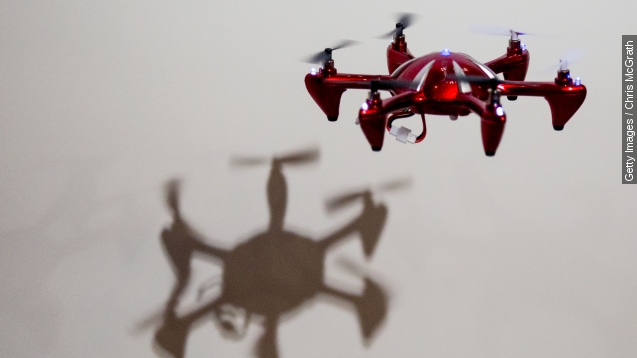 SMS
Register Your New Drone Before You Get It Stuck In A Tree
By Leah Becerra
By Leah Becerra
December 25, 2015
If you received a drone this Christmas, you might want to register it with the government before its maiden flight outdoors.
SHOW TRANSCRIPT

That new drone you got for Christmas is awesome. Now, before you recklessly fly it into a tree — or a person — you should probably register it. (Video via DJI)

The Federal Aviation Administration requires all pilots — that's you — to register their small unmanned aircraft — that's your drone — online at faa.gov/uas/registration.

The administration opened its mandatory registration Monday and said that within 48 hours, more than 45,000 owners had registered. That's a lot in two days.

The FAA's rules actually require new drone pilots to "register before the first flight outdoors." Judging by how many people have tweeted about getting drones stuck in trees today, there should be a lot of new registrations.

Those who owned their drones before Dec. 21 have until Feb. 19 to get their aircraft registered. (Video via The Verge)

Though it's worth noting that for the first 30 days the registry is open, the FAA will refund the $5 fee to submit information. (Video via CNET)