Refugees Heading To Hungary Will Soon Face Another Border Block 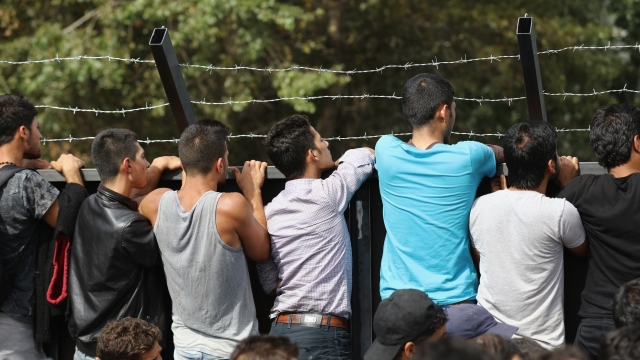 A fence at the Hungarian border has been pretty effective at blocking refugees from entering. Now the country plans to build a second one.

Last year, 400,000 refugees entered Europe through Hungary. But Hungary tightened its border and built a more-than-100-mile fence alongside Serbia. Official data says only 18,000 have entered through Hungary in 2016.

Hungarian officials later added on to that fence to cover the Hungary-Croatia border.

Hungary's prime minister recently announced the country would build another wall along the Serbian border. He told Hungary's public radio, "We'll have to stop them with force, and we will do so."

And Hungarian security has used force before. Last year, forces tear-gassed refugees trying to break through the border barrier.

Laws in Hungary have made it illegal to cross the border, punishable by up to three years in prison.

Humanitarian groups have criticized the "no-man's land" Hungary and Serbia have created with the countries' strict borders.

Others argue Hungary's treatment of refugees isn't in line with European Union laws. Despite the criticisms, it appears Hungary will move forward with the new wall.