Why Is The Night Sky Black? Dust, Gas And The Color Red 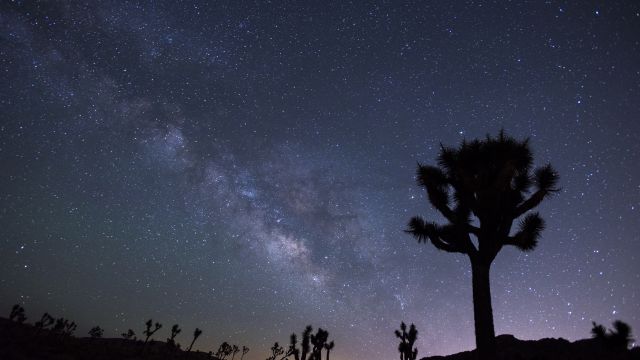 SMS
Why Is The Night Sky Black? Dust, Gas And The Color Red
By Matt Picht
By Matt Picht
October 13, 2016
The night sky isn't as empty as it looks. You just can't see everything that's out there.
SHOW TRANSCRIPT

A starry sky at night is a beautiful sight. But what's with all the negative space?

The theory goes like this: We're surrounded by billions and billions of galaxies. Since those galaxies are all emitting light, we should be seeing more than enough starlight to fill up the entire night sky.

Scientists previously thought that the finite and constantly expanding universe kept galaxies too far apart to really cover every point in the sky. But a new discovery from the Hubble Space Telescope complicates things.

Researchers examined Hubble's images of deep space. And now they think there might be at least 10 times as many galaxies in the observable universe as we thought.

By converting Hubble's deep space pictures into 3-D images, the researchers were able to measure how galaxies were distributed throughout different points in the universe's history. Their work estimates there are about 1 or 2 trillion galaxies in the observable universe — over 90 percent of which have never been studied.

This newfound abundance of galaxies would be more than enough to erase the black space in the night sky. But the empty space is still there, and researchers think they know why.

Redshifting is one explanation: As the universe pulls stars farther and farther away from us, the starlight is distorted into red wavelengths. Those wavelengths eventually fade from the visible spectrum.

Plus, space is far from empty. There's also a lot of interstellar dust and gas floating around that can soak up the light from distant stars and prevent it from reaching Earth.

SEE MORE: The Impatient Person's Guide To The End Of The Universe

So when you look up at the night sky, know that the empty spaces aren't really empty — there's just a lot of interference between you and the far reaches of the universe.