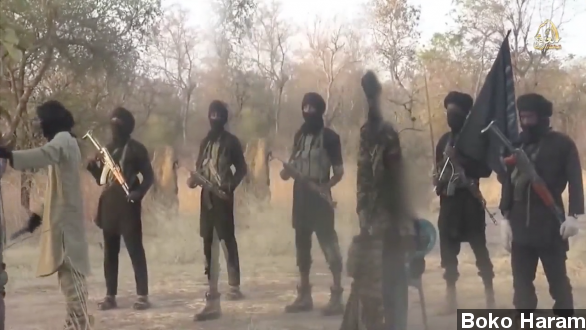 SMS
Recent Boko Haram Violence Might Be A Sign Of Desperation
By Kate Grumke
By Kate Grumke
March 3, 2015
Boko Haram released a video of an apparent beheading Monday, but some said that violence could be a sign of military success against the group.
SHOW TRANSCRIPT

Boko Haram has released a new video that appears to show the beheading of two captives. The graphics and style are a less-than-subtle nod to ISIS.

The group controls a large area in Nigeria and last summer declared an Islamic caliphate — but a multi-country military coalition is reportedly having some success in the fight against the group.

"More than 300 Boko Haram militants have been killed in operations around northeastern Nigeria," Euronews reports.

The coalition of Chad, Cameroon, Niger and Nigeria has not only killed and arrested militants but has managed to push Boko Haram out of multiple towns it once controlled.

But since it started losing ground, the group has stepped up its suicide bomb attacks — even using young girls as bombers.

This latest video is a reminder that the group is still around and wants to be compared to ISIS.

But it could also be a sign that Boko Haram is feeling threatened.

The Daily Beast quoted a U.S. intelligence official who in January predicted the uptick in attacks, saying, "If they lost territory, I think they would resort to violence."

And Tuesday, a Nigerian lawmaker warned that the group may adopt more guerrilla tactics as it gets more desperate. So if there's a silver lining to the group's newfound brutality, it's that the coalition could finally be backing Boko Haram into a corner.

The Nigerian presidential elections were postponed in an attempt to control the violence. So far, Nigerians are still set to vote March 28.