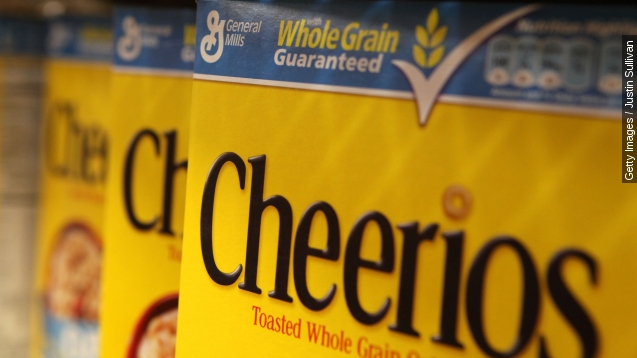 SMS
Recall Issued Over Not-So-Gluten-Free Cheerios
By Ben Lawson
By Ben Lawson
October 6, 2015
General Mills is recalling 1.8 million boxes of Cheerios due to an error at a production facility that introduced wheat into some products.
SHOW TRANSCRIPT

General Mills is voluntarily recalling 1.8 million boxes of Cheerios that were labeled as gluten-free but actually may contain wheat.

The company says all the regular and Honey Nut Cheerios produced in one of its locations over several days were affected. A list of the products affected is available on the Cheerios website.

The company blames the issue on a mix-up at one of its production facilities. It says wheat flour was accidentally mixed with gluten-free oat flour during transportation. (Video via General Mills)

In a post online, General Mills said it is "embarrassed and sorry" over the error and called it an "isolated" incident. (Video via General Mills)

Gluten-free products have been gaining popularity recently for their health benefits.

Gluten can cause illness or reactions for people with wheat allergies or celiac disease, which affects about 1 percent of the population, according to the National Foundation for Celiac Awareness.

General Mills announced in February the products were going gluten-free by July. Despite the main ingredient in Cheerios being oats, it took the company several years to develop a process that ensured wheat flour wouldn't come in contact with the product. (Video via General Mills)