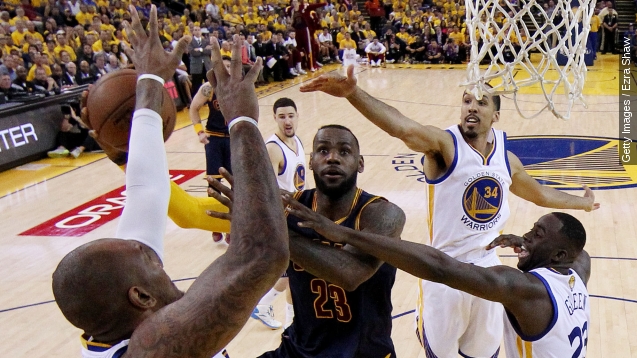 Games one and two of the NBA Finals were both nail-biters that had to be settled in overtime. That's the first time that's ever happened, and the added drama is a big boost for ratings.

According to Nielsen ratings, more than 18 million people have tuned in to watch the Golden State Warriors take on the injury-riddled Cleveland Cavaliers through the first two games of the series.

Game two viewership was also up 26 percent over the same game in last year's matchup between Miami and San Antonio.

That's pretty remarkable, especially considering game two was played Sunday night, so it faced stiff competition from a new episode of HBO's "Game of Thrones" and the Tony Awards on CBS.

What's more, according to Advertising Age, if this pace keeps up, this year's showdown will become the highest rated NBA Finals in the 13 years ABC has broadcast the series.

It's easy to see why the NBA is snatching all these extra eyeballs. Look no further than Cleveland's prodigal son, LeBron James, who's been putting up ridiculous numbers. (Video via Nike)

With Kyrie Irving and Kevin Love sidelined due to injuries, James has essentially been a one-man show, prompting the inevitable comparisons to Michael Jordan.

On the other side, the Warriors deliver a unique brand of basketball: a run-and-gun high-powered offense that cashes in on buckets quicker than opponents can blink.

Plus, when he's on, Golden State's Steph Curry is one of the best shooters in NBA history. It all clashes perfectly with the Cavs' controlled half-court game. (Video via Under Armour)

This all very good news for the league because NBA Finals ratings have somewhat plateaued in the past decade.

That includes Kobe Bryant's title runs with the Lakers, the Spurs fundamentally sound but less-than-riveting championship victories and King James' five previous finals' appearances. Since 1999, the Nielsen average for the Finals has crept over 12 million just once, which makes this year so special — so far, at least.

You ready for another Jordan comparison?

The last time the NBA Finals' average Nielsen rating shot above the 18 million mark was, you guessed it, when "His Airness" won his sixth NBA Championship in 1998.