Read The Shirt: Jeb Bush Will Fight You For His Dad's Honor 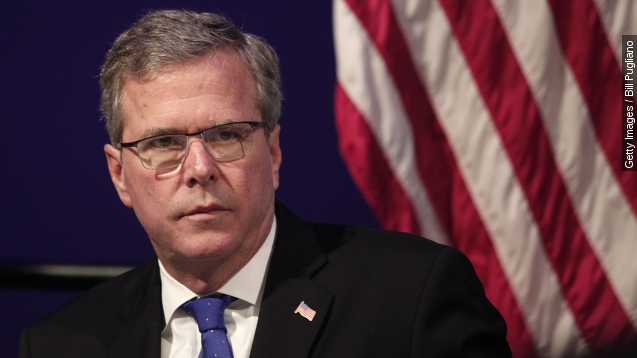 SMS
Read The Shirt: Jeb Bush Will Fight You For His Dad's Honor
By Ryan Biek
By Ryan Biek
August 6, 2015
A fundraiser T-shirt on Jeb Bush's website is getting attention for its "warning" not to mess with his dad.
SHOW TRANSCRIPT

Maybe Jeb Bush is trying to reach a younger audience with his new campaign merchandise.

Because this is possibly the most hipster political swag ever.

But besides this gem of a tank,

the most newsworthy item up for grabs is a T-shirt  that reads, "My dad is the greatest man I've ever known and if you don't think so we can step outside."

Whoa –– one dad joke and all of a sudden we're ready to touch gloves. He even kind of looks like a boxer putting on a hood in this campaign ad. (Video via Jeb Bush)

Perhaps it's a good thing the shirt defends his dad and not his brother, George W. Bush.

George H.W. Bush has the second-highest approval rating among living presidents, with a 63-31 favorable-to-unfavorable ratio. George W. Bush, on the other hand, isn't as popular. Jeb would have to fight 44 percent of America for his brother's honor.

Jeb Bush is one of 10 Republican candidates selected for Thursday night's GOP debate in Cleveland broadcast by Fox News. We'll see if he continues that fighting spirit beyond his rhetoric on cotton.