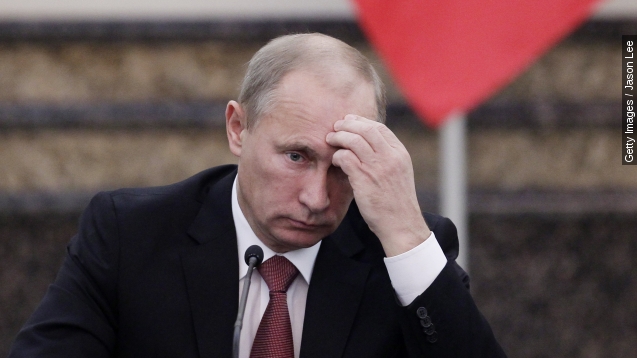 Russia's decision to block 89 European politicians and military leaders from the entering the country has been met with a range of reactions: confusion, satisfaction and a bit of comedy. (Video via Al Jazeera)

A European Union spokesperson responded with outrage, calling the travel ban "totally arbitrary and unjustified especially in the absence of any further clarification and transparency." (Video via Press TV)

One Belgian politician, whose name appears on the blacklist, was a bit more bit tongue-in-cheek, sarcastically praising Russian President Vladimir Putin for the "honor" of being included.

"Basically, what the Russians are doing is having a tantrum. Mr. Putin is angry at the sanctions being imposed, but they are imposed for extremely good reasons because they've been very aggressive toward Ukraine. They've annexed part of its territory, and it's not their country. They shouldn't be there," Rifkind said.

A spokesperson for Russia's state-run news agency says the blacklist is in response to EU economic sanctions levied against Russia.

Those sanctions were put in place early last year following Russia's annexation of Crimea and its alleged involvement in the violence in eastern Ukraine. In March, the EU decided to extend those sanctions for the remainder of the year, a move no doubt infuriating the Kremlin. (Video via Channel 4)

Recently, both Russia and the European Union have instituted travel bans, but the way each one figures out who gets placed on the blacklists appears to be a bit of mystery.

In July 2014, the EU placed a travel ban on more than 30 people or entities, but the blacklist seemed more focused. It included five of Putin's top confidants in the Security Council and various pro-Russia fighting groups in Ukraine, such as the "Donetsk People’s Republic." (Video via Euronews)

Meanwhile, Russia's new blacklist against the 89 European officials, which was obtained by Finland's national public broadcasting company, appears to be more of a grab bag of politicians and military leaders from several European Nations.

Simply speaking up against Russia might make you a target. Former Deputy Prime Minister of the U.K. Nick Clegg was one of the more high-profile figures blacklisted. (Video via ITV)

Last July, Clegg blasted FIFA's decision to award Russia the 2018 World Cup. He told The Sunday Times it was "unthinkable" to give Putin the honor of hosting soccer's biggest event after Russia had been accused of being involved in the downing of Malaysia Airlines Flight MH17.

According to TASS, Russia's state-run news agency, Russia's Foreign Ministry has declined to comment on the blacklist.