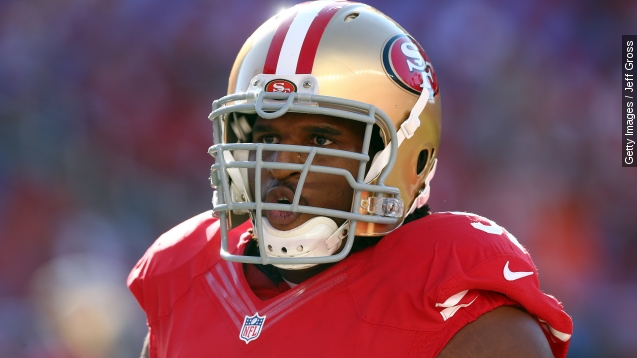 SMS
Ray McDonald's NFL Future Looks Bleak
By Matt Moreno
By Matt Moreno
May 26, 2015
McDonald was released by the Chicago Bears after he was arrested on domestic violence charges Monday, his second such arrest in two years.
SHOW TRANSCRIPT

That non-comment from McDonald is a far cry from what he had to say in April about domestic abuse allegations.

"People can put out stuff that's not very credible, and it can assassinate someone's character by doing that," McDonald told reporters in April after signing with the Bears.

Now, McDonald, the Bears and the NFL have a lengthy process ahead of them.

This is the new NFL Personal Conduct Policy, which affects players after arrests like this. Basically, McDonald's case is now under investigation by both the NFL and local authorities. After that concludes, a punishment will be handed down with a chance to appeal before a final outcome is determined.

But the NFL future of the 30-year-old veteran isn't too promising.

According to USA Today, this qualified as McDonald's fourth run-in with the law since 2010. He was arrested once for a DUI in 2010, again in 2012 for a warrant related to that DUI and again in 2014 for domestic violence.

He was released from the San Francisco 49ers in the offseason after a sexual assault investigation.

"There's the legal side, and then there's the, 'do you want to work in the NFL again' and 'can you sell an NFL team to give you another chance?' I think that will be an awful hard sell at this point," radio host and former NFL player Mike Golic said on ESPN.

A hard sell to another team, another coach, another general manager, another owner and much, much more. McDonald's arrest certainly won't just cause problems for himself, but for many others, too.

Bears owner George McCaskey is one who vouched for McDonald's stint in Chicago.

McCaskey, though, is on the NFL's newly formed code of conduct committee announced by commissioner Roger Goodell last offseason.

"We've acknowledged that we need to change what we're doing, now we have to get to 'what are those changes going to be?'"

ESPN writer Jane McManus says McCaskey "should be removed from that committee" as punishment for taking a chance on a player like this.

And USA Today writer Nancy Armour believes he should be banned from the stadium for the first half of a season and the organization should be hit with a hefty fine.

"If the NFL wants the good work it's done over the last year to combat domestic violence to actually mean something, it has to go after the owners and GMs who have long enabled them."

McDonald is currently a free agent and is free to sign with any team, though his past and a likely upcoming suspension could hinder any interested parties. Not including McDonald, only two players in the NFL in the past 10 years have been arrested twice for domestic violence.