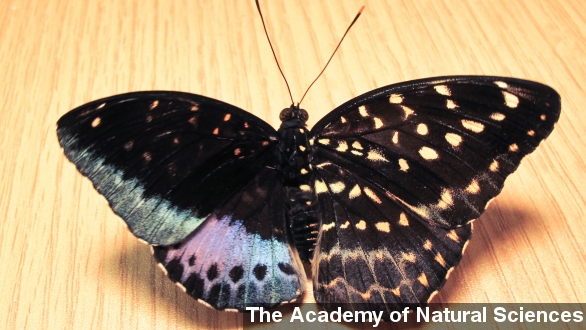 Right away you can tell this isn't your typical butterfly. But those mismatched wings are more than just a difference in pattern.

The butterfly, which is no longer living, was a resident of the Academy of Natural Sciences of Drexel University until earlier this month. Museum staff noticed the interesting features as soon as it emerged from its cocoon and spread its wings.

And it's not just the wings that are split down the middle. The butterfly's body is also half male and half female. Scientists say the butterfly has a condition called bilateral gynandromorphy.

One researcher explained, “Gynandromorphism is most frequently noticed in bird and butterfly species where the two sexes have very different coloration. It can result from non-disjunction of sex chromosomes, an error that sometimes occurs during the division of chromosomes at a very early stage of development.”

Tech Times points out this condition is different from hermaphroditism, where it would have the outward characteristics of only one gender.

Scientists say the condition is very rare, but they aren't quite sure how rare because it is hard to spot in most species where both sexes look alike.

The butterfly will be on public display starting Jan. 17 at Drexel's Academy of Natural Sciences.

This video includes images from the Academy of Natural Sciences of Drexel University.