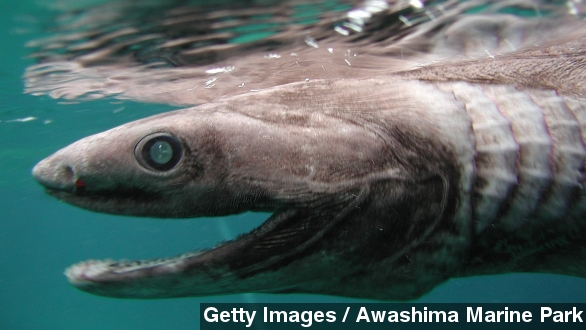 This is a frilled shark, an uncommon species of deep-water shark.

This is how a lot of people tend to react to the frilled shark.

"It's a six-foot long creature that looks like that ... terrifying," a WHDH anchor said.

Two WPVI anchors commented: "Does not look happy does he? 80 million years probably a little tough on anybody."

And a KOMO anchor warned: "Welcome to your next nightmare. That'll haunt you for a while."

The shark was in the news because a trawler caught one of the sharks off the southwestern coast of Australia.

The trawler captain, David Guillot, told radio station 3AW: "I've been at sea for 30 years, and I've never seen a shark that looked like that. ... When one of the deck hands went to pick it up by its tail, its ability to turn back on itself quite sharply was something I hadn't seen before either."

The shark is often described as a living fossil because it is one of the oldest surviving species of shark. Scientists believe the species dates back at least 150 million years to the Jurassic period. (Video via Discovery)

Despite its ancient lineage, the frilled shark was only captured on film in its natural habitat for the first time in 2004 by a deep-sea National Oceanic and Atmospheric Administration probe.

The fate of the specimen fished in Australia is uncertain: The local trawling industry association offered it to the Commonwealth Scientific and Industrial Research Organisation.