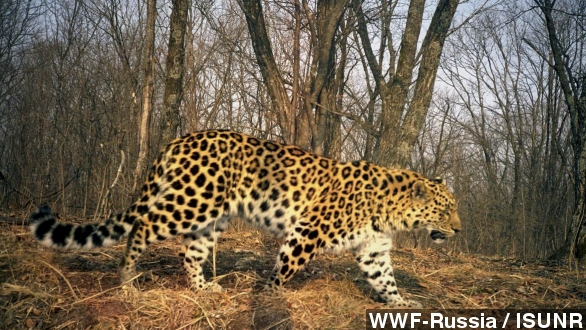 There's something of a revival happening on the Russian-Chinese border.

Then, less than a week later, a census of Amur leopards in the same region found the world's most endangered big cat had close to doubled its population in Russia, from 30 in 2007, to 57. (Video via World Wide Fund for Nature)

While both species have a long way to go before they're no longer considered endangered, their recovery is significant, and it's worth asking why it's happened.

Russian President Vladimir Putin's affinity for big cats is well documented, but despite the ridicule, his public appearances have been part of a larger effort to attract attention to the country's endangered cats. (Video via RT)

Putin's push for big cat conservation has included Russian airline Aeroflot carrying an image of the Amur leopard on one of its planes and information about the leopard onboard. (Video via Channel One Russia)

Another important factor has been the creation of the Land of the Leopard National Park, a swath of more than 1,000 square miles of protected land that covers the leopard's breeding grounds and is home to some tigers as well.

It's there that the leopard's numbers have almost doubled, and the park's camera traps have allowed scientists to better monitor the leopard's population. (Video via Land of the Leopard National Park)

The biggest threat both the Amur tiger and leopard face is poaching, with their pelts going for tens of thousands of dollars, but they can also be threats to each other. (Video via Al Jazeera)

"In this case it seems, the death was caused by a tiger," an Al Jazeera reported said.

China's conservation efforts haven't focused as heavily on the Amur cats, and the country has its own critically endangered big cat to contend with: the South China tiger. (Video via Save China's Tigers)

Although the tiger is considered extinct in the wild in China, the country has been funding efforts to reintroduce individuals in some areas.

Those conservation efforts have drawn some criticism from members of the WWF and other conservation groups, who say the efforts to restore the Amur tiger's numbers are more realistic.

The Amur cats' recovery comes in the wake of positive signs from India — home to more tigers than anywhere else in the world — that tiger numbers there are on the rise as well.

This video includes an image from J. Patrick Fischer / CC BY SA 3.0.