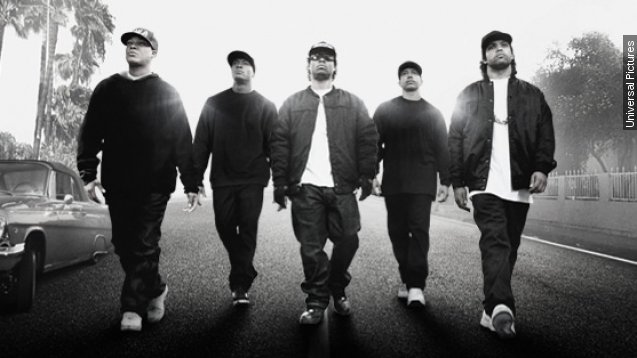 SMS
Rappers, Dinos And Minions Are Making Universal Very Rich
By Eugene Daniels
By Eugene Daniels
August 15, 2015
"Straight Outta Compton" is estimated to make $57 million this weekend, which would put Universal Pictures over the $2 billion threshold for 2015.
SHOW TRANSCRIPT

NWA biopic "Straight Outta Compton" is on track to break down all expectations and rake in $57 million this weekend.

Original estimates were between $25 and $29 million, which the movie almost reached at the end of Friday alone. (Video via Universal Pictures)

If "Compton" hits its mark, Universal will become the studio to reach $2 billion the fastest. If you've been paying attention, 2015 has been a record-breaking, money making year for the studio.

It all started in February when a college student met a kinky billionaire.

"Fifty Shades of Grey" was the highest grossing February debut ever with a more than $85 million haul in the US. The movie ended its run by adding more than $166 million to the Universal bank.

And then came Universal's first sequel of the year.

"Furious 7" grossed more than $351 million in the states, all while proving people will indeed watch a movie that is basically the same over and over... and over.

And then came the reboot every studio should try and copy.

"Jurassic World" blew past every expectation this year with the biggest opening weekend ever and went on to become the third highest grossing film in U.S. history.

According to Box Office Mojo, Universal released five of the current top 10 highest grossing movies of 2015, when you throw in "Minions" and "Pitch Perfect 2."

As a matter of fact, out of its 11 releases in 2015, only four have made less than $81 million in the U.S. And with the hugely anticipated "Steve Jobs" and "Sisters" still to come, the hits will probably keep on coming.