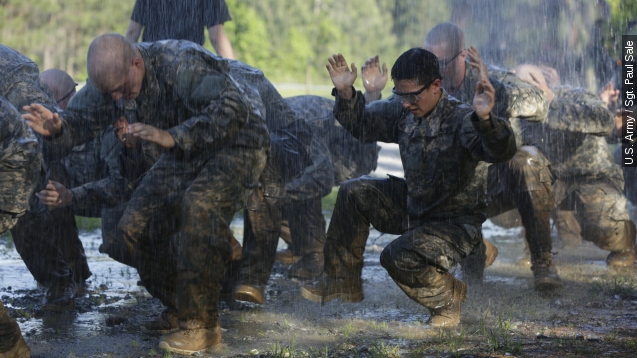 Supporters of having women on the front lines in the military took a blow Friday. The U.S. Army announced the last eight women remaining in Ranger School failed to graduate. (Video via U.S. Army)

"Every citizen who can meet the qualifications of service should have that opportunity," said former Defense Secretary Leon Panetta in January 2013.

It was more than two years ago the Defense Department announced the end of the 1994 Direct Ground Combat Definition and Assignment Rule, opening the door for more than just men as ground troops.

The various branches of the military have until 2016 to open ground combat to women unless they can show good reason not to.

Friday's announcement about Ranger School doesn't mean the Army has rejected all female ground troops, but it's significant. Rangers are considered the Army's best of the best, and NPR reports 90 percent of the Army's senior infantry officers are rangers. (Video via U.S. Army)

NPR also noted only about half of the men who try pass the school. (Video via U.S. Army)

Over the last two years, opinions have differed over how to integrate women into frontline-ready service and brought up tough-to-answer questions. Do current models truly test an ability to survive and execute missions or are they more of a rite of passage? Should those tests be gender neutral? And so on.

The major in charge of the Ranger School's land navigation test says women have served alongside rangers before.

"And even who have been killed with ranger units in Afghanistan, so I think to deny them the same opportunity for training is probably not right," Maj. John Vickery told NPR. (Video via U.S. Army)

There's also the slight irony that just as women are being tested for direct combat, the military may have less need for it as it winds down two wars that focused heavily on counterinsurgent tactics instead of conventional warfare. Already, Fort Riley in Kansas has begun retraining soldiers to handle larger-scale warfare involving tanks and artillery instead of "mission-specific" tactics where close combat like kicking in doors is more likely.

"Hey, Third Squad! Pick up the casualties," a Marine official yelled during training.

But regardless of the world landscape and type of war the future may bring, some skills will always be necessary for a combat soldier. (Video via CBS)

"One of the biggest concerns was if there's a casualty, how women would perform," Maj. Jane Blair of the U.S. Marine Corps told NPR. "It is actually a pretty critical task. I mean, everyone wants to know that if they were a casualty, they'd be able to be extracted." (Video via U.S. Army)

As for the Ranger School, three of the eight women who failed the test will be allowed to start over if they want. The Christian Science Monitor reports the women offered fresh approaches to solving problems and could be crucial in the field.

As one colonel and current ranger put it, while at war, "I was rarely with female soldiers who couldn’t hang."