Rand Paul Loves Filibustering, But Does It Work? 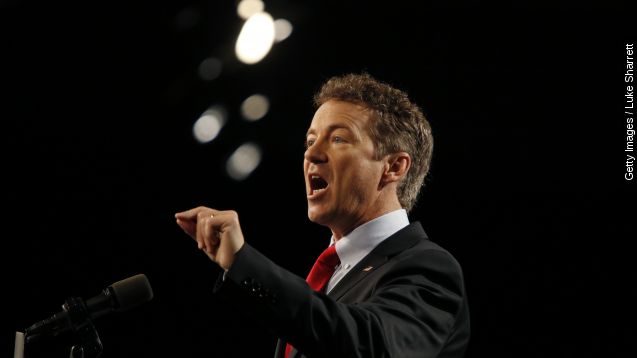 SMS
Rand Paul Loves Filibustering, But Does It Work?
By Ben Levin
By Ben Levin
May 20, 2015
Rand Paul is filibustering a vote to renew parts of Patriot Act, but it's not the first time he's used the filibuster as a way to generate publicity.
SHOW TRANSCRIPT

What's a filibuster? Well, it's something Rand Paul is very good at: You stand behind your Senate desk and talk for as long as you can in an effort to delay anything else from happening.

This time, it's about the Patriot Act: Rand Paul is trying to gum up the efforts of Senate Majority leader Mitch McConnell to renew section 215 of the controversial law, passed in the aftermath of 9/11, which, under the NSA's interpretation, allowed the agency to collect and store the phone records of all Americans. (Video via MSNBC)

"I will not let the Patriot Act — the most unpatriotic of acts — go unchallenged. At the very least we should debate," Paul said.

This isn't Paul's first filibuster: In March 2013 he protested what he called an illegal drone program by giving the ninth-longest filibuster in history, delaying the confirmation of NSA Director John Brennan for more than 13 hours. (Video via Youtube)

"I don't want the standard to be that if you're close to a bad person and you're a male between the ages of 16 and 50 that you're no longer a civilian," Paul said.

The filibuster forced then-Attorney General Eric Holder to send a letter to the Senator, clarifying that the President can't use an armed drone to kill a non-combatant US citizen on US territory — good to know. (Video via U.S. Department of Justice)

There was also the time in 2011 when, after only six months on the job, Paul threatened to filibuster any deal that resulted from budget negotiations to avoid a debt ceiling crisis. (Video via CBS)

But remember: They passed a budget in 2011, and Brennan was eventually confirmed in 2013. So Rand Paul likes to filibuster, but is filibustering that effective?

But if you're trying to raise your national profile, because maybe you're running for President, a filibuster might just do the trick: They do get a lot of headlines.