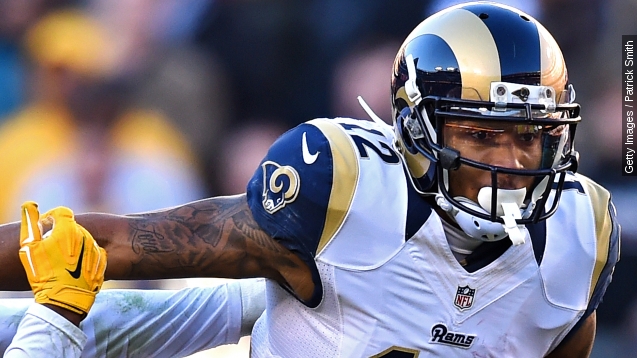 SMS
Rams WR Stedman Bailey Critical But Stable After Shooting
By Matt Moreno
By Matt Moreno
November 25, 2015
The St. Louis Rams wide receiver was reportedly sitting in a car with four other people when another car drove up and someone opened fire.
SHOW TRANSCRIPT

A St. Louis Rams wide receiver is in critical but stable condition after a shooting near his hometown in Miami Gardens, Florida.

NFL.com reports Stedman Bailey was shot twice in the head while sitting in a car late Tuesday night. The outlet reports another car pulled up to his and opened fire.

"Behind us here is where that shooting happened, actually, outside of a relative's home. ... We spoke to a family member who said there were five people in that car ... when someone drove up next to them outside of this home here and opened fire," WTVJ reports.

Bailey was reportedly a passenger in the vehicle. Reports say the driver was shot multiple times and suffered more serious injuries.

The St. Louis Post-Dispatch says the driver was trying to shield children in the car. One witness told WPLG he saw about 33 shell casings when he pulled up.

The St. Louis Rams released a short statement on the incident, saying they were aware Bailey was in an incident and that they had spoken to him. The Rams also promised updates as they learn more.

Bailey is currently serving a four-game suspension for violating the NFL's substance abuse policy. The former third-round pick out of the University of West Virginia was also suspended last year for two games for violating the league's PED policy. (Video via Topps)

Multiple Rams players asked fans to pray for Bailey on Twitter. Bailey has been with the Rams since 2013. The alleged shooter hasn't been caught.