Raiders-Chargers LA Stadium Is As Complicated As You'd Think 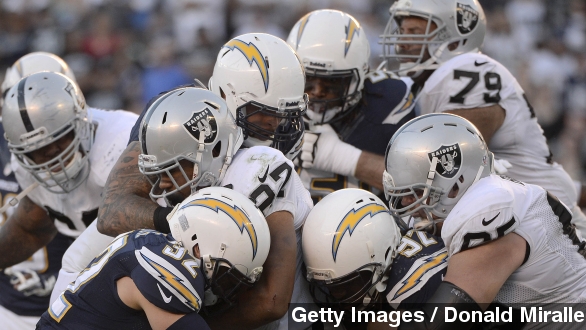 The San Diego Chargers and Oakland Raiders might be on-field rivals, but the two franchises teamed up this week, announcing plans to pursue a shared, privately funded $1.7 billion stadium in Los Angeles' South Bay.

Now this presents some issues because, y'know, neither the Chargers nor the Raiders currently play in Los Angeles.

So to say this is a controversial proposal would be ... an understatement.

Both teams do have a history in LA. The Chargers played the 1960 season — their first — at USC's Memorial Coliseum before moving south.

The Raiders played in the same grounds for 13 seasons in between stints in the Bay Area.

Los Angeles has been without a team since the Rams moved to St. Louis in 1995.

Teams across the NFL have spent the past two decades using the City of Angels as a very persuasive relocation threat, convincing taxpayers to pony up for new stadiums lest the team move west.

Curbed LA points out this is just one of SIX recent proposals for a new stadium.

And they're scattered all over town, with several proposals based outside of LA's city limits — as far east as Industry, and this latest plan is one of two proposed in the city of Carson.

At 15 miles and who-the-heck-knows-how-long-with-traffic south of downtown, that's not the most convenient location for Angelenos.

But it would probably be the preferred spot for the Chargers, who claim 25 percent of their fan base is in Los Angeles and Orange counties.

A move to Carson would go a long way toward retaining that fan base. Just two months ago, current Rams owner Stan Kroenke proposed an 80,000-seater stadium in Inglewood on a piece of land he also owns.

So why should we assume either of these proposals will go any further than any others from the past two decades?

As the LA Times points out: "Those owners are saying they can't get it done in their current cities, and they have control of viable stadium sites in the L.A. area. That has never happened before."

All three teams are on year-to-year leases with their current stadiums, so they could theoretically move to LA as soon as the 2016 season.

As for the viability of sharing a stadium, the New York Giants and Jets are the only two NFL teams that currently do so — and have done so since 1984.

But as The Washington Post points out, those teams don't have nearly the same mutual animosity as the Chargers and Raiders. And the AFC West rivals have never had to share a metro area, much less a stadium.

But, like the New York teams, pooling their resources might be the only way the Chargers and Raiders get a new stadium without public funds. The New Meadowlands is the only NFL stadium built or renovated since 1997 using 100 percent private funds, at a cost of $1.6 billion.