RadioShack May Shut Down, Sell Stores To Sprint 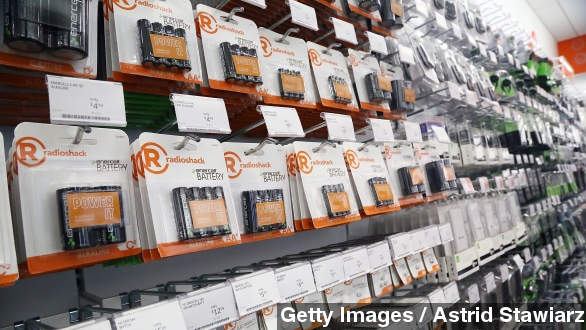 According to a report from Bloomberg, consumer electronics retailer RadioShack is preparing to close its doors for good.

The report says RadioShack is in talks with Sprint, negotiating a deal to sell half its more than 4,000 stores to the telecommunications company and shut down the rest.

News of a potential shut down doesn’t come as much a surprise, as it’s been a rough year for the company.

In mid-January, RadioShack was rumored to be filing for bankruptcy after almost three years of losses.

And according to CNN, the New York Stock Exchange announced on Monday it would suspend trading of RadioShack stock. Companies trading on the exchange are required to have "a market cap of at least $50 million."

RadioShack’s current market cap sits at a little under $28 million.

Several outlets have pointed to competition from discount and online retailers as the cause of RadioShack’s multi-year sales slump.

With discounted gadgetry and the convenience of shopping from home, it’s pretty easy to see how Amazon and other online retailers could be pulling sales away from RadioShack. (Video via Amazon)

The Wall Street Journal says the writing has actually been on the wall since the 1990s.
"Current and former executives said the chain began to lose its cachet in the 1990s as it shifted its attention away from die-hard electronics enthusiasts and gave its staff incentives to sell items like mobile phones."

While mobile phone sales helped keep the company afloat for several years, the Journal notes customers would look to other retailers for high-margin products like cases and screen protectors.

Despite RadioShack’s efforts to update its stores and overall image …
"The 80s called. They want their store back," said the RadioShack employee.
… we could soon see the end of a 94-year-old company.