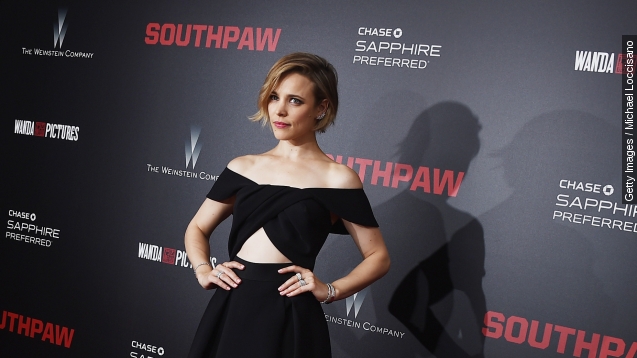 Rumors of McAdams joining the comic-book film have circulated since early summer.

She said, "It's still super-early days, and I don't know where that's gonna go — if it's gonna go anywhere at all."

This is the latest addition to her career shift.

McAdams' earlier roles in her career were in rom-coms like "Mean Girls," "The Notebook" and "Wedding Crashers."

But like other actresses who wanted to shed the genres they'd been typecast for, McAdams is starting to do the same.

For example, we don't recognize Reese Witherspoon from "This Means War" or "Sweet Home Alabama." We will always remember her as Elle Woods in "Legally Blonde."

But when she landed the lead role in Oscar-nominated "Wild," she proved she could break out of the "America's sweetheart" typecast she had been given.

The same situation happened to Jennifer Aniston. We remember her as Rachel Green on "Friends," and women remember her for the iconic hair cuts.

For years, she played roles in rom-coms including "Horrible Bosses," "Just Go With It" and "We're The Millers" before she finally landed the more serious role of a chronic pain sufferer in "Cake."

She told The Hollywood Reporter when she first started transitioning to film after "Friends," executives saw her as "only the girl next door, only the funny gal."

She wanted them to see her interest in telling deeper stories, like the one she tells in "Cake."

Similarly, Rachel McAdams told the New Zealand Herald that after having three hit rom-coms in a row, she "got worried about being typecast."

But she seems to be making a successful transition to the darker, more challenging roles. Aside from her role in "Southpaw" and now "Doctor Strange," she landed the highly coveted female lead in season two of "True Detective."

She's also rumored to return in "Sherlock Holmes 3" and has the lead female role in the upcoming film "Spotlight," based on the true story of how the Boston Globe unearthed a child molestation scandal in the Catholic Church.