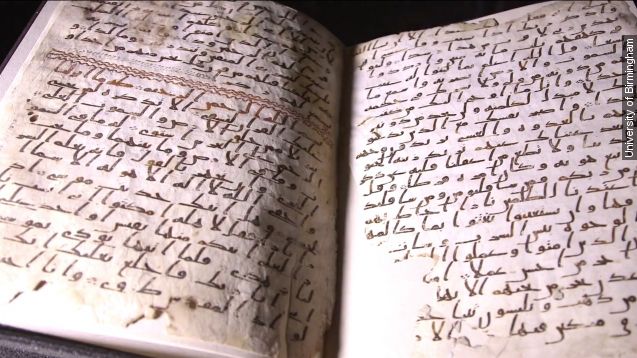 SMS
Quran Believed To Be 1,400 Years Old Mirrors Modern Texts
By Jamal Andress
By Jamal Andress
July 22, 2015
The radiocarbon test indicates the manuscript was written sometime between 568 and 645 A.D., and the Prophet Muhammed is believed to have died in 632.
SHOW TRANSCRIPT

The Muslim faith says the Quran was finished roughly 1,380 years ago. And now a radiocarbon test has revealed fragments of a Quran at the University of Birmingham to be at least 1,370 years old — and perhaps even older.

"Islam is associated with the Prophet Muhammed. ... This manuscript could well have been written shortly after he died," said David Thomas, a professor at the university.

"All the Muslims in the world would love to see this manuscript," said Birmingham Central Mosque Chairman Muhammad Afzal.

The fragments are written in Hijazi script which is a collective name for a group of some of the oldest Arabic scripts.

According to the New York Times, "The manuscript is part of a collection of more than 3,000 documents from the Middle East amassed in the 1920s by Alphonse Mingana, a theologian and historian." The excursions to the Middle East were funded by the famous Cadbury family.

The fragment comes from chapters 18 and 20 from the Quran, and according to a Birmingham professor, the words help solve a longstanding debate among historians about if the holy book reads now the way it was written then.

University of Birmingham professor David Thomas said, "The part of the Quran contained in the fragments are very similar indeed to the Quran as we have it today." Which could mean not much has changed in the hundreds of years since the Quran was written.

The University of Birmingham plans to put the incredible find on display in October at The Barber Institute of Fine Arts, located on the university's campus.

This video includes an image from Library of Congress.