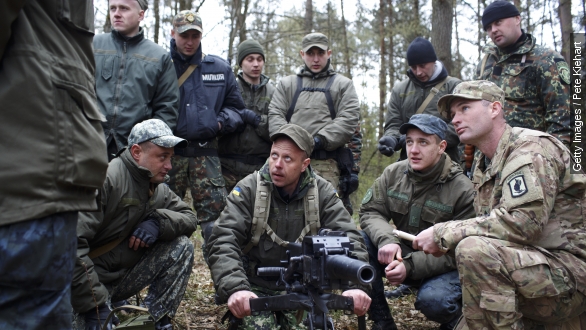 It's kind of telling that the most recent video out of Ukraine to make headlines was this — a fox making a sandwich, instead of scenes of fighting in the country's east. (Video via Radio Free Europe)

February's truce has afforded the Ukrainian military time to regroup, and even train with American forces, but it could be showing signs of weakening.

The Guardian's Ukraine correspondent Alec Luhn reports eight Ukrainian soldiers died in fighting this week, constituting "the most intense clashes since the ceasefire agreed in Minsk."

That might not be promising, but considering some outlets were proclaiming the ceasefire dead less than a week after it went into effect, it is surprising.

Still, you could make the case that one of the biggest tests to the truce is yet to come.

Columnist Lev Golinkin argues the upcoming May 9th victory parade could rile up nationalists in some of Ukraine's safely government-held cities, and push the country closer to out and out fighting again. (Video via ODN)

That day commemorates Soviet Forces' victory over Nazi Germany, and while it's celebrated in both Ukraine and Russia, it offers an opportunity for the Kremlin to push the narrative of a strong central Russian government saving the east from fascism. (Video via U.S. National Archives)

It's been more than a year now since fighting started in Ukraine. More than 6,000 people have died in the conflict and more than a million have been displaced. (Video via International Red Cross)