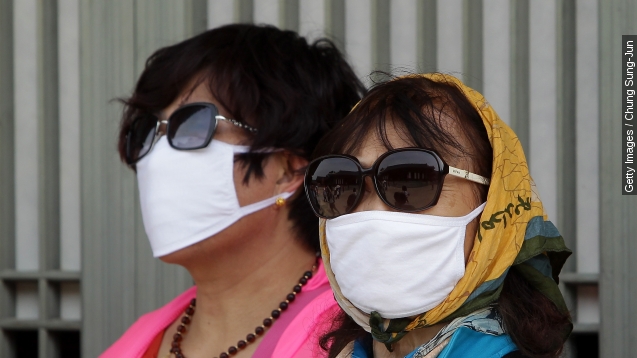 Middle East Respiratory Syndrome has now infected 50 people in South Korea, and killed four. The virus, for which there is no known vaccine or treatment, has triggered a fierce crackdown.

“South Korean President Park Geun-hye has demanded that everything is done to stop an outbreak of the deadly virus MERS in her country.” (Video via Euronews)

“More than 500 schools have been shut down in South Korea to help prevent the spread of the MERS virus,” said CNN’s Amara Walker.

The outbreak has drawn comparisons to the 2003 SARS epidemic in China, which was blamed for 774 deaths. Both come from the same family of respiratory infections known as Coronaviruses, but the medical community thinks tackling MERS will be easier.

This time around, scientists can bring better identification, more accurate tracking and faster quarantine procedures to bear. One researcher told NBC, “As long as the virus hasn't changed, they'll be on top of it.”

Epidemiologists expect the heightened awareness and rapid response in South Korea means MERS won’t take off the same way SARS did. It also helps that this new version simply doesn’t have the same transmission potential. (Video via ABC)

That’s when a virus has — or develops — the ability to quickly spread through human populations. When its potential is at or above 1, epidemics become statistically more likely.

One analysis showed that absent containment procedures, SARS has a potential of about 3, meaning one case could spread it to roughly three other people. Studies have shown MERS typically spreads to 1.5 people at most, and usually fewer than 1.

That’s even accounting for so-called “superspreaders,” or those anomalous individuals who carry extremely high viral loads and can spread a virus to dozens of other people.

Health agencies traced the origin of South Korea’s outbreak to one such person.

The World Health Organization says as of now, “there is no evidence to suggest sustained human-to-human transmission in communities and no evidence of airborne transmission.”

That’s definitely good news: because while MERS doesn’t spread as easily as SARS, it is more deadly. Where the death rate for SARS topped out at 9.6 percent in its last major outbreak in 2003, MERS’ fatality rate is 36 percent.

This video includes images from Getty Images and Eric Fischer / CC BY 2.0.