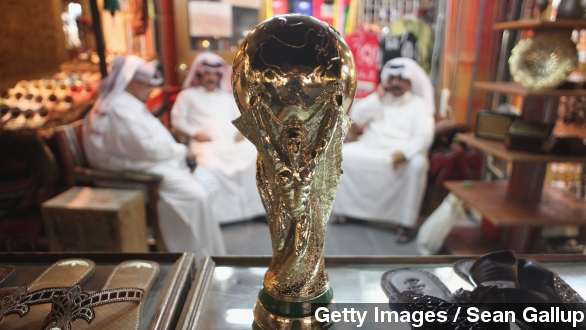 The soccer governing body announced its official recommendation Tuesday, saying because of the heat, Qatar's 2022 World Cup should be held in late November and December. (Video via ESPN)

FIFA argues it had to rule out the summer months, from May to September, because the heat would endanger players and fans. April's out, too, because Ramadan starts April 2 that year, and January through February would clash with the Winter Olympics. That left November and December as the most viable months.

More importantly, the move would put the World Cup right in the middle of most European soccer seasons, which generally run from August to May.

Richard Scudamore, chief executive of the Barclays Premier League — the most-watched league in the world — has said he's disappointed by the recommendation. (Video via Sport 360)

English leagues, and the Premier league in particular, provided more players for the 2014 World Cup than anywhere else, and more than 75 percent of the players in that tournament played for European clubs.

Despite this, European soccer's governing body, UEFA, favors the winter World Cup, and its president, Michel Platini, said clubs' opposition to the move won't influence the decision. (Video via SPOX)

And FIFA usually gets what it wants. The organization has stuck with Qatar despite criticism over the logistics of playing a World Cup in such a small and hot country, along with allegations of Qatar's human rights violations.

The latter has been extensively documented by multiple outlets, with contractors allegedly exploiting migrant workers by not paying them, forcing them to work in unsafe conditions and confiscating their passports. (Video via The Guardian)

Sharan Burrow of the International Trade Union Confederation told RT: "They are often abused, underpaid; the work is dangerous. ... They can't leave the country because they're basically owned by the employer."

The Guardian reports, on average, one migrant worker dies every other day in the country, though it admits its own estimates are likely low and the International Trade Union Confederation's estimates are much higher.

The ITUC's Tim Noonan told France 24, "With the increasing work force projected by the Qatari authorities themselves of some additional 500,000 workers or more, as many as 4,000 people could lose their lives."